Answer: c
Explanation: Mortar is a workable paste used to bind building blocks such as stones, bricks, and concrete masonry units together, fill and seal the irregular gaps between them, and sometimes add decorative colours or patterns in masonry walls. In its broadest sense mortar includes pitch, asphalt, and soft mud or clay, such as used between mud bricks. Mortar comes from Latin mortarium meaning crushed.

2. __________ is a liquid or semi-liquid mixture of water and any combination of different kinds of soil (loam, silt, and clay).
a) Mud
b) Concrete
c) Mortar
d) Paint
View Answer

Answer: a
Explanation: Mud is a liquid or semi-liquid mixture of water and any combination of different kinds of soil (loam, silt, and clay). It usually forms after rainfall or near water sources. Ancient mud deposits harden over geological time to form sedimentary rock such as shale or mudstone (generally called lutites). When geological deposits of mud are formed in estuaries the resultant layers are termed bay muds.

Answer: a
Explanation: Lime mortar today is primarily used in the conservation of buildings originally built using lime mortar, but may be used as an alternative to ordinary portland cement. It is made principally of lime (hydraulic, or non hydraulic), water and an aggregate such as sand.
Sanfoundry Certification Contest of the Month is Live. 100+ Subjects. Participate Now!
advertisement
advertisement

4. What does ‘2’ denotes in the following window diagram? 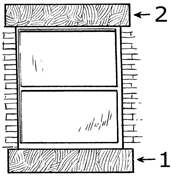 Answer: a
Explanation: A lintel or lintol is a structural horizontal block that spans the space or opening between two vertical supports. It can be a decorative architectural element, or a combined ornamented structural item. It is often found over portals, doors, windows and fireplaces. Modern day lintels are made using prestressed concrete and are also referred to as beam in beam and block slabs or ribs in rib and block slabs. These prestressed concrete lintels and blocks are components that are packed together and propped to form a suspended floor concrete slab.

5. What does ‘1’ denotes in the following window diagram?

a) Chowkhat
b) Sill
c) Base
d) Shelve
View Answer

Answer: b
Explanation: A window cill (also written as windowsill or window-sill) is the surface at the bottom of a window. A dictionary of architecture categorically defined the characteristics of a windowsill as The lowest form of window casement. Windowsills hold pieces in place and slope downward to drain water.
Check this: Civil Engineering Books | Civil Engineering MCQs

Answer: c
Explanation: Veneer plastering covers the entire wall with thin liquid plaster, uses a great deal of water and is applied very wet. The walls intended to be plastered are hanged with “Blueboard” (named as such for the industry standard of the outer paper being blue-grey in color). This type of sheet rock is designed to absorb some of the moisture of the plaster and thus allow it to cling the plaster better before it sets.
Veneer plastering is a one-shot one-coat application; taping usually requires sanding and then adding another coat, since the compound shrinks as it dries.

7. The most common type of ceiling is the___________ which is suspended from structural elements above.
a) parabolic ceiling
b) curved ceiling
c) dropped ceiling
d) arched ceiling
View Answer

Answer: c
Explanation: The most common ceiling that contributes to fire-resistance ratings in commercial and residential construction is the dropped ceiling. In the case of a dropped ceiling, the rating is achieved by the entire system, which is both the structure above, from which the ceilings is suspended, which could be a concrete floor or a timber floor, as well as the suspension mechanism and, finally the lowest membrane or dropped ceiling. Between the structure that the dropped ceiling is suspended from and the dropped membrane, such as a T-bar ceiling or a layer of drywall, there is often some room for mechanical and electrical piping, wiring and ducting to run.
advertisement

8. The term ___________ in construction is applied to the finishing of mortar joints in masonry (stone or brick). In exposed masonry, these are considered to be the weakest part.
a) painting
b) deteriorating
c) pointing
d) finishing
View Answer

Answer: c
Explanation: The term Pointing in construction is applied to the finishing of mortar joints in masonry (stone or brick). In exposed masonry, joints are considered to be the weakest and most vulnerable spots from which rain water or dampness can enter. Pointing means implementing the joints to a depth of 10 to 20mm and filling it with better quality mortar in desired shape.