1. The superstructure of a building is the part that is entirely above its foundation or basement.
a) True
b) False
View Answer

Answer: a
Explanation: A superstructure is an upward extension of an existing structure above a baseline called Ground Level in general and it usually serves the purpose of the structure’s intended use.
In Buildings, the portion of the structure that is above ground level that receives the live load is referred to as Superstructure. The superstructure of a building is the part that is entirely above its foundation or basement. 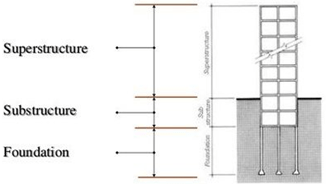 2. The figure below represents octagonal structure. 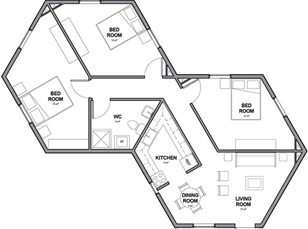 Answer: b
Explanation: In geometry, an octagon (“eight angles”) is an eight-sided polygon or 8-gon.
A regular octagon has Schläfli symbol {8} and can also be constructed as a quasiregular truncated square, which alternates two types of edges.

Answer: a
Explanation: A regular hexagonal room has 6 rotational symmetries (rotational symmetry of order six) and 6 reflection symmetries (six lines of symmetry), making up the dihedral group D6. The longest diagonals of a regular hexagon, connecting diametrically opposite vertices, are twice the length of one side.
Note: Join free Sanfoundry classes at Telegram or Youtube
advertisement
advertisement

4. With a very small structure a single column with an umbrella structure above may be acceptable.
a) True
b) False
View Answer

Answer: a
Explanation: For a larger structure columns may be placed on the radius at 2/3 of the roof’s radius. This results in minimal roof stresses. But while a circular structure with main structural elements being radial and passing through the center sounds good, it is unbuildable with more than 8 columns due to connections at the center. Past this point we need to develop some sort of structural placement drawing for the final roof and use that to locate the columns.

Answer: a
Explanation: Considering a rectangular plan, and assuming the lateral load in one direction, its clear that only the two walls in the direction of the force would more or less contribute to the stiffness and thus the seismic resistance. However, in a circular plan, every part of the wall would have some component in the direction of the seismic load. Also, instead of the regular X-shaped cracks (on account of in-plane shear in load bearing walls), a circular plan would experience a parabolic failure pattern, and that could possibly also be a reason for the increased seismic resilience.
Take Civil Engineering Drawing Mock Tests - Chapterwise!
Start the Test Now: Chapter 1, 2, 3, 4, 5, 6, 7, 8, 9, 10
advertisement

6. Triangle is most stable structure.
a) True
b) False
View Answer

Answer: a
Explanation: If u apply force on any link or joint the net force is distributed all over the structure ie sides and joints. This means all sides and joint experience force thus the force is distributed and this makes it more rigid and stable structure.
In case of all others shapes this is not present.
Example for square.—if u apply load on top link, joint the bottom link doesn’t experience any force. Hence the load is taken by two sides on which the square is standing. Similarly for pentagon, hexagon and all others.

Answer: c
Explanation: Circular structure is drawn with a polygon with as many sides as you need to keep the distance between columns safe for the materials you are using. Stronger material will require less columns i.e. less small circular patterns.
advertisement

8. A semi-circular structure with a dome shape roof erected over sacred relics of Buddha is known as ___________
a) edicts
b) pillars
c) stupas
d) monoliths
View Answer

Answer: c
Explanation: A stupa (Sanskrit- “heap”) is a mound-like or hemispherical structure containing relics (śarīra – typically the remains of Buddhist monks or nuns) that is used as a place of meditation. A related architectural term is a chaitya, which is a prayer hall or temple containing a stupa.
In Buddhism circumambulation or pradakhshina has been an important ritual and devotional pracice since the earliest times, and stupas always have a pradakhshina path around them.

To practice all areas of Civil Engineering Drawing for Interviews, here is complete set of 1000+ Multiple Choice Questions and Answers.