This set of Basic Electrical Engineering Interview Questions and Answers focuses on “Temperature Coefficient of Resistance”.

Answer: b
Explanation: In the case of an insulator, the energy gap between the conduction band and the valence band is very large. When the temperature is increased, the electrons move from the conduction band to the valence band and hence it starts conducting. When conductance increases, resistance decreases, since C=1/R. Thus, when the temperature increases, resistance decreases in insulators.

Answer: a
Explanation: The resistance of metals increases with an increase in temperature thus, it has a positive temperature coefficient.
Subscribe Now: Basic Electrical Engineering Newsletter | Important Subjects Newsletters

Answer: b
Explanation: Insulators have a negative temperature coefficient because as temperature increases, the resistance of insulators decreases.

5. What is the unit of temperature coefficient?
a) ohm/centigrade
b) ohm-centigrade
c) centigrade-1
d) centigrade
View Answer

Answer: c
Explanation: R=Reff[1+temp. coeff(T-Teff)].
From the given expression: (R/Reff-1)/(T-Teff) = temp. coeff. Hence, the unit is the reciprocal of that of temperature = centigrade-1.
Get Free Certificate of Merit in Basic Electrical Engineering Now!

7. The temperature of a coil cannot be measured by which of the following methods?
a) Thermometer
b) Increase in resistance of the coil
c) Thermo-junctions embedded in the coil
d) Calorimeter
View Answer

8. The rise or fall in resistance with the rise in temperature depends on ________
a) The property of the conductor material
b) The current in the metal
c) Property of material as well current in that material
d) Does not depend on any factor
View Answer

9. If the temperature is increased in semi-conductors such that the resistance incessantly falls, it is termed as _______
a) Avalanche breakdown
b) Zener breakdown
c) Thermal runway
d) Avalanche runway
View Answer

Answer c
Explanation: When the temperature keeps increasing, the resistance keeps falling continuously and hence the current to increase. This causes the heat in the semi-conductor to rise. This causes the temperature to increase further and the resistance to further decrease. This process continues and until there is sufficient heat to destroy the structure of the semi-conductor completely. This is known as a thermal runway.
advertisement

Answer: c
Explanation: When the temperature of the material falls to absolute zero, the resistance falls to zero and hence there are no I2R losses. Since resistance is zero, conductance is almost infinity and hence these materials are known as superconductors.

To practice all areas of Basic Electrical Engineering for Interviews, here is complete set of 1000+ Multiple Choice Questions and Answers. 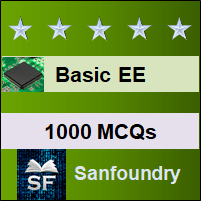