1. Which of the following is not a factor affecting the ignition advancement?
a) Nature of fuel
b) Engine speed
c) Entropy
d) Load
View Answer

2. Which among the following increases with speed which in turn improves the rate of combustion?
a) Enthalpy
b) Turbulence
c) Vaccum
d) Entropy
View Answer

Answer: b
Explanation: For engines with higher speed requires more ignition advancement but the turbulence increases with speed, which improves the rate of combustion, requiring lesser advance. The net requirement, however, remains the increased advance at higher speed.

Answer: c
Explanation: Nitrogen oxides (NOx) emission increases with an increase in ignition advance. However, emission of CO is not much affected by ignition timing, rather the same is influenced by air/fuel ratio. And there is very little effect of ignition advance on hydrocarbon.

4. How many numbersof weights are present in a centrifugal advancement method?
a) 2
b) 3
c) 4
d) 1
View Answer

Answer: a
Explanation: The distributor shaft is actually in two pieces connected through centrifugal advance arrangement, which consist of two centrifugal weights. These weights are pinned and connected with the breaker plate using spring.

Answer: d
Explanation: In general the crankshaft degree of advancement in a centrifugal advance type varies between 34 and 38 crankshaft degrees, including the initial timing,which is usually about 8-degree bottom dead center.

6. Which of the following part vacuum is referred to as a ported vacuum in a vacuum advance type?
a) Crankcase
b) Engine deck
c) Radiator
d) Carburetor
View Answer

7. In the below-shown diagram of a vacuum advance type carburetor, what is the name of the part? 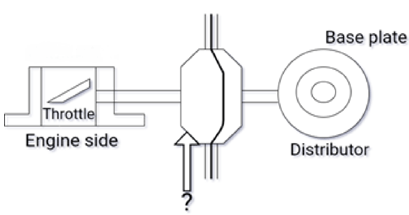 Answer: b
Explanation: The part in between the engine side and distributor is known as diaphragm. The vacuum advance type consists of a carburetor, diaphragm, and distributor. Vacuum advance unit senses any variation of ported or manifold vacuum, which are a direct measure of engine load.

8. Which among the following is provided in a vacuum advance type to keep the advance unit at zero if no vacuum is applied as during idling?
a) Carburetor
b) Diaphragm
c) Centrifugal weights
d) Return spring
View Answer

9. Which of the following condition is taken care of by the centrifugal advance mechanism?
a) Speed
b) Load
c) Temperature
d) Detonation
View Answer

Answer: d
Explanation: The computerized advance control uses a computer with memory, a timing map, which contains spark advance values for all combustion of speed, load, and other conditions. Based upon the signals received from various sensors, the ECU sends the signal to the ignition coil at the precise moment indicated in the timing map.

11. How many numbers of vacuum openings are provided in the carburetor in a complete vacuum control type?
a) 4
b) 2
c) 16
d) 8
View Answer

Answer: b
Explanation: In a complete vacuum control type there are two vacuum openings in the carburetor. One is at the venturi and the other one is just on the atmospheric side of the throttle when the same is closed.

Answer: b
Explanation: The difference between ignition delay and the occurrence of spark in terms of degree of crankshaft rotation, is termed as ignition advance. It is defined concerning the cylinder top dead position.

13. Which of the following is termed as the maximum permissible number of degrees per second, change during acceleration to keep up with the timing requirement?
a) Attack rate
b) After burning
c) Detonation
d) Dribbling
View Answer

Answer: a
Explanation: The ignition timing during acceleration should have a sufficient attack rate to keep up with the timing requirement. Attack rate is the maximum permissible number if degree per second, change which may be as high as possible in some high-performance engines.