1. Which among the following material is plated on the cylinder liner to improve the resistance to corrosion and wear?
a) Cast iron
b) Chromium
c) Zinc
d) Lead
View Answer

Answer: b
Explanation: The liners are exposed to ammonia vapor at about 500 degrees centigrade and then quenched. Chromium plating improves the resistance to wear and corrosion. The use of chromium with aluminum alloy results in increased thermal efficiency.

Answer: a
Explanation: Liners are used to restore to its original size a cylinder block which has been rebored beyond allowable limits. They are made in the form of barrels from a special alloy containing silicon, manganese,nickel, and chromium. Liners are cast centrifugally.

3. Which type of fit is used with the block in a wet liner?
a) Slip fit
b) Press-fit
c) Friction fit
d) Hydraulic dilation
View Answer

Answer: a
Explanation: In a wet liner the block and the liner are fitted together with the help of slip fit. It is the condition where the liner is meant to easily slip into the mating part with minimal friction. Whereas in the dry liner press fit is used to fit the liner and the cylinder block.

4. Which of the following is placed in between the liner and the water jacket in a dry liner? 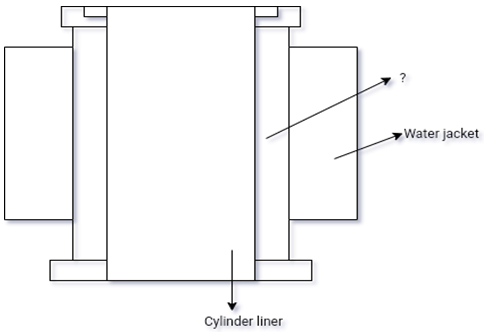 Answer: b
Explanation: The dry liner is made in the shape of a barrel flange at the top which keeps it into position. The entire outer surface bears against the cylinder block casting. The cylinder block prevents the contact of the water and liner there the attack of corrosion is less in dry liners.

5. Which among the following material is most commonly used in the manufacturing of cylinder liner?
a) Titanium
b) Copper
c) Brass
d) Grey cast iron
View Answer

6. Which of the following is not the reason for the breaking of the flange in a wet liner?
a) Worn out counterbore seat
b) Excessive tightening of head bolts
c) Uneven counterbore
d) Damaged piston pin boss
View Answer

Answer: d
Explanation: The breaking of a flange in a wet liner is due to the wrong tightening sequence of cylinder head bolts or their excessive tightening, uneven counterbore in the block to receive the liner, worn-out counterbore seats and not damaged piston pin boss.

7. Which of the following is coated outside along with a conventional cast-iron sleeve in a hybrid liner?
a) Austenitic steel 21-4N
b) Nimonic alloy
c) S.A.E 1045
d) AlSI 12 alloy
View Answer

Answer: d
Explanation: The hybrid liner produced at Federal-Mogul’s Fried Berg (Germany) factory, consists of a conventional cast-iron sleeve coated on the outside with on AlSi 12 alloy with a melting point below that of the aluminum engine block, using a proprietary Federal-Mogul process.

Answer: c
Explanation: The use of hybrid liners results in upto 30% higher heat transfer rates, which can reduce cylinder wall temperature by upto 40 degrees centigrade. The distortion of loads is claimed to be upto three times better, which results in upto 40% reduction in oil consumption.

10. What is the percentage of maximum second-order bore distortion in a conventional cast-in liners?
a) 11
b) 7
c) 5
d) 3
View Answer

Answer: a
Explanation: The maximum second-order bore distortion in conventional cast-in liners is seen about 11% when compared to a hybrid liner the bore distortion is reduced in a running engine by two-thirds.

11.Which of the following technique is used to limit the crank formation in a hybrid liner?
a) Presence of a water channel
b) Presence of excess material
c) Presence of pressure relief valve
d) Presence of vent holes
View Answer

Answer: a
Explanation: In a hybrid liner a water channel is drilled between two cylinders which limits the crack formation, allowing coolant to penetrate only upto the liner coating. In conventional liners, coolant may seep down the joint between the liner and the casting.

12. Which of the following results in a decrease in the scuffing near the sealing ring area?
a) Torque
b) Enthalpy
c) Engine speed
d) Running clearance
View Answer

Answer: d
Explanation: Scuffing near the sealing ring area leads to localized hardening of the ring, very high pressure is exerted against the cylinder liner resulting in its distortion so that running clearance is deceased and the scuffing occurs near the affected area.

13. What is the wall thickness in millimeter preferred between cylinder bores in a hybrid liner?
a) 4
b) 5
c) 3
d) 2
View Answer

Answer: c
Explanation: In a hybrid liner it is claimed that a 3mm wall thickness between cylinder bores is sufficient on pressure-die cast blocks, which me and reduced space between adjacent cylinders and hence improvement in overall engine packaging by OEMs.