Answer: a
Explanation: The crankwebs should be adequately strong to withstand the twisting and the bending loads. However increasing their size excessively would increase the inertia which would tend to wind and unwind the crankshaft when the engine is running.

2. Which of the following is defined as the distance between the axis of the main journal and the crankpin center lines is exactly one half of the engine stroke?
a) Crank length
b) Crank web
c) Crank-throw
d) Crank shift
View Answer

Answer: b
Explanation: The distance between the axis of the main journal and the crankpin center lines is exactly one half of the engine stroke and is called crank-throw which determines the crankshaft turning effort.

3. Which of the following helps in the uniform speed of crankshaft despite uneven power impulses of the engine cylinder?
a) Piston
b) Connecting rod
c) Gasket
d) Flywheel
View Answer

Answer: d
Explanation: The flywheel absorbs excess energy during the power stroke and gives out the absorbed energy during the other three strokes. Thus it is the flywheel that keeps the crankshaft rotating at the uniform speed throughout despite uneven power impulses of engine cylinders.

Answer: c
Explanation: The design features of a crankshaft is that the crankpin length is at least 30% of its diameter,which itself usually not less than 60% of the cylinder core. The thickness of the crank web is usually about 20% of the cylinder bore size.

5. Which of the following is termed as the escape of the gasses from the combustion chamber and entering into the crankshaft?
a) Scuffing
b) Piston slap
c) Buckling
d) Blow-by
View Answer

Answer: d
Explanation: Blow bye is the condition wherein the exhaust gasses escape from the combustion chamber and enter into the crankshaft and contamination of the oil takes place. To avoid this crankcase ventilation is provided.

6. In the below-shown diagram what is the make of the missing part of the counterweights? 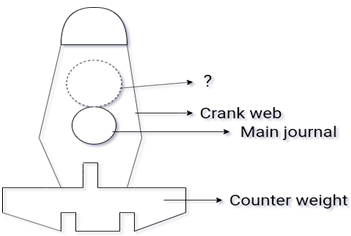 Answer: a
Explanation: There are two types of counterweights and they are the integral counterweight and attached separately. The parts of both remain the same the parts are crankpin, Frank web and main journal, and counterweight. The above part is the crank pin.

7. Which of the following acts as a damper in a belt-driven crankshaft?
a) Fulcrum
b) Rocker arm
c) Belt
d) Strainer
View Answer

Answer: c
Explanation: The vibration damper reduces the torsional vibration utilizing the dragging effect produced by the inertia of damper flywheel. Engines with belt-driven crankshaft do not need vibration damper. The belt acts as a damper.

8. Which of the following material is the most commonly used in the construction of crankshaft?
a) Cast steel
b) Bronze
c) Copper
d) lead
View Answer

Answer: a
Explanation: The crankshaft was initially forged but later on casting of the crankshaft has also become quite common. The cast crankshaft both steel as well as S.G iron have been used. The S.G iron has a high strength cast iron in which carbon is in the form of spherical modules of graphite.

9. Which of the following is not a major part of the crankshaft?
a) Main journal
b) Crank pins
c) Water pump
d) Crank webs
View Answer

Answer: b
Explanation: The crankshaft are generally of two types, they are one piece and built up. In the built-up construction the crankpins and journals are bolted to crank arms, which also serves as flywheels. One-piece construction is almost universally used for automotive crankshaft.

Answer: c
Explanation: The ultimate tensile strength of the crankshaft material is about 600 MPa. The crankshaft must be adequately strong, tough, hard, and should possess high fatigue strength. As such proper material has to be selected for the construction.

Answer: c
Explanation: A typical cast steel for crankshaft has a carbon composition of 1.35-1.6 percentage. Along with carbon the stew contains chromium in 0.05-0.5 percentage, silicon 0.85-11 percentage, manganese 0.6-0.8 percentage etc.

13. Which of the following is also known as harmonic balancer?
a) Counterweight
b) Crank web
c) Vibration dampers
d) Main journal
View Answer

Answer: c
Explanation: Vibration damper is also called a harmonic balancer. It is mounted on the front end of the crankshaft. It consists of a damper flywheel-cum- crankshaft pulley and a driving flange connected with a rubber ring in between.