Answer: c
Explanation: Cell gravity variation is one among the other battery troubles during the cell gravity variation the gravity readings of all the cells should be the same. If the reading of some cells is different from the rest by more than 10 gravity points, it indicates the loss of acid from a cell.

Answer: c
Explanation: The water in the electrolyte keeps on evaporating and periodic checks must be made to ensure that proper level and gravity is being maintained. If this is not done, the separators and the plate may be permanently damaged.

3. Which is the liquid that is used in the cleaning of the battery terminals and clamps to avoid corrosion?
a) Hydrochloric acid
b) Dilute sulphuric acid
c) Liquid ammonia
d) Liquid nitrogen
View Answer

Answer: c
Explanation: Due to oxidation the battery terminals and the clamp must be cleaned after regular intervals. After cleaning with a cloth moistened with liquid ammonia, a coat of petroleum jelly helps to retard their corrosion again.

4. Which of the following is not a cause for deterioration of plates?
a) The high specific gravity of the electrolyte
b) Freezing of electrolyte
c) Mechanical damage to the battery
d) The proper mixture of water and acid
View Answer

5. Which of the following is not a reason for the self-discharge of the battery?
a) Contamination of electrolyte
b) Damaged separators
c) Long term storage
d) Use of distilled water for electrolyte
View Answer

Answer: d
Explanation: The main cause for self-discharging of the battery are contamination of the electrolyte, damaged separators and long time storage. By using pure sulphuric acid and distilled water for preparing electrolyte helps in the life of the battery.

6. Which of the following increases due to a reduction in the capacity of battery plates due to sulphation?
a) Pressure
b) Internal resistance
c) Temperature
d) Enthalpy
View Answer

Answer: b
Explanation: Large lead sulphate crystals, whitish in colour are formed on the plates. These crystals are difficult to be converted back into active materials on recharging. Sulphation of the battery reduces the capacity and increases the internal resistance of the cells.

7. Which of the following is the result of long term storage of the battery?
a) Low load
b) variation in pressure
c) Variation in enthalpy
d) Stratification
View Answer

8. In which type of battery there is no requirement of any water during normal service?
a) Lead-acid
b) Lithium-ion
c) Lead-cadmium grid
d) Zinc-air
View Answer

Answer: a
Explanation: In the lead-cadmium grid battery does not require any water to be added during normal service, as excessive water loss may be caused due to higher than normal charging rate due to incorrect setting of the regulator.

Answer: a
Explanation: The internal short-circuiting is caused by either damaged separators or when the active material dropping from the plate forms itself into a heap so high as to cause short-circuiting. It results in rapid self-discharge and sulphation.

11. Which of the following is not a precaution to avoid sulphation?
a) Proper electrolyte level
b) Proper specific gravity
c) Rapid discharging
d) Proper water addition
View Answer

Answer: c
Explanation: The battery which is not excessive sulphates can be recharged keeping the charging rate low. The precautions to avoid sulphation are the battery water level should be checked, and the electrolyte level and gravity level should be maintained at the proper value and heavy discharge of battery should be avoided.

12. Which of the following lead to the bulged case of a battery?
a) Loss of water
b) Internal short-circuiting
c) Sulphation
d) Overcharging
View Answer

Answer: d
Explanation: The main trouble a faces is bulged case which because of overcharging of the battery to avoid overcharging the regulated voltage must be reduced. And the clamps should not be too tight and the temperature of the battery should be maintained.

13. Which of the reason for cracking of the battery container as shown below? 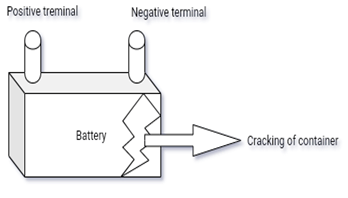 Answer: a
Explanation: The container develops cracks generally due to mechanical shocks caused by rough roads jolts or rough handling. If the cracks are on the outer walls, the electrolyte will leak. Cracks on the interior cause internal short-circuiting of the plates of the two adjoining cells.

To practice all written questions on Automotive Engine Auxiliary Systems, here is complete set of 1000+ Multiple Choice Questions and Answers.