This set of Casting, Forming and Welding Multiple Choice Questions & Answers (MCQs) focuses on “Effects of Friction and Velocity Distribution”.

Answer: a
Explanation: Ef = 4fLv̅²/2D is the energy loss due to friction in a circular conduit. The frictional losses are present due to sudden contraction or enlargement of the flow cross-sections. Where, v̅ = Average velocity, D = Diameter of the conduit, L = Length of the conduit and f = friction factor.
advertisement

Answer: d
Explanation: In real fluids, the frictional losses are always present, especially when there is a sudden contraction or enlargement of the flow cross-sections and also due to a gradual change in the flow direction, e.g., in a 90° bend and similar other fittings.

Answer: c
Explanation: Velocity of a liquid metal in the sprue and the gate is not uniform across the cross-sections. It is maximum at the axis of the conduit and zero at the solid surface due to high adhesive bonding between the surface and the fluid particles, which is responsible for viscosity and results in no slip condition.
Note: Join free Sanfoundry classes at Telegram or Youtube
advertisement
advertisement

Answer: b
Explanation: The non-uniform velocity distribution can be accounted for by modifying the kinetic energy term in the integrated energy balance equation by replacing the (velocity)² term by v̅²/β, where v̅ is the average velocity and β is a constant. β is equal to 0.5 for laminar flow and 1 for turbulent flow in a circular conduit.

Answer: a
Explanation: The velocity distribution within the conduit depends on the shape of the conduit and the nature of flow (i.e. turbulent or laminar). The velocity profile is parabolic in laminar flow and is logarithmic in turbulent flow. Shape of the conduit means cross-sectional area which varies in inverse proportion to the velocity.
Take Casting Forming and Welding I Practice Tests - Chapterwise!
Start the Test Now: Chapter 1, 2, 3, 4, 5, 6, 7, 8, 9, 10
advertisement

Answer: c
Explanation: eғ is the friction loss factor and it depends on the ratio of the flow area and Reynolds number of the flow. For a laminar flow, the length and diameter of the smaller flow cross-section have to be taken into account. The value of eғ depends on whether the flow area is enlarging or contracting in the direction of flow.
advertisement 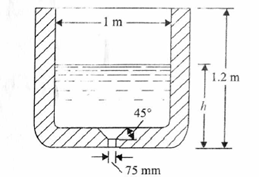 9. In the given figure of Entry with rounded corner type of changes in flow geometry, the value of friction loss factor (eғ) is_____ 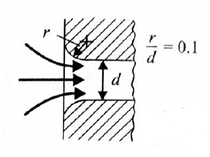 Answer: a
Explanation: eғ = 0.33 eғs, where eғ is the friction loss factor. The value of eғ depends on whether the flow is enlarging or contracting in the direction of flow. And eғs refers to the value corresponding to a sharp change of geometry with identical initial and final dimensions.
advertisement

10. Which of the following gating designs is used to avoid the splashing of the molten metal in the mould?
a) Vertical gating
b) Horizontal gating
c) Inclined gating
d) Bottom gating
View Answer

Answer: d
Explanation: In the case of bottom gating design the liquid metal is filled in the mould from bottom to top, thus it avoids the splashing of the molten metal in the mould that can cause erosion. And this design also prevents the oxidation which is associated with the vertical gating.

11. Gating design for a mould of 50cm*25cm*15cm is shown in below figure. The cross-sectional area of the gate is 5 cm2. Neglecting friction and velocity distribution effects, what is the filling time (t) for the design (in second)? 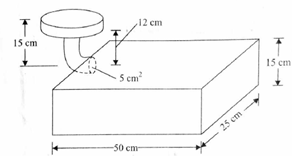 12. Which of the following ways can use for stopping the rapid solidification of the molten metal in the mould?
a) By having the mould of high permeability
b) By making a uniform flow of molten metal
c) By creating high pressure on the molten metal
d) By using too much superheat
View Answer

Answer: d
Explanation: When the liquid metal is poured very slowly, then the time taken to fill up the mould is rather long and the solidification may start even before the mould has been completely filled up. This can be avoided by using too much superheat, but this creates the gas solubility problem which is not good for castings. 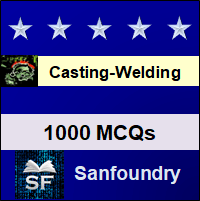