2. Why should a cognitive radio be capable of differentiating “User” and “Things” entities?
a) To properly filter the signals
b) To offer different levels of priority
c) To amplify the signals
d) To re-direct the signals
View Answer

Answer: b
Explanation: The architecture model builds an environment consisting of world, cognitive radio, and a world model within the cognitive radio. The world is composed of entities such as user, home network, people, things, networks, etc. The cognitive radio must be capable differentiating these entities to respond in accordance to pre-determined priority levels.

6. Which among the following is a data structure included in the architecture map in addition to the general structure of cognition cycle?
a) Decide
b) Dialog state
c) Act
d) Plan
View Answer

7. Which among the following is not a part context section of a RKRL frame?
a) Uniform Resource Locator
b) Time
c) Location of frame
d) Stimulus
View Answer

8. Which among the following is used to represent processing components?
a) Flowchart
b) Scatter diagram
c) Topological map
d) Histogram
View Answer

9. Which among the following is the map that bridges the world unit with the cognitive radio unit in architecture map?
a) Input
b) Reasoning
c) Planning
d) Acting
View Answer

Answer: a
Explanation: The input map connects the world unit to the sensory data segment of the cognitive radio in architecture map. It is made up of components that convert external input to the format of internal sensory data.

12. Which among the following phases do the components B1, B2 belong? 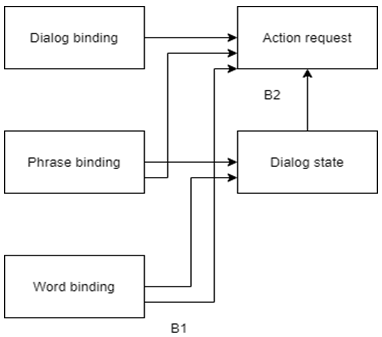 Answer: d
Explanation: The component B1 and B2 belong to the orient phase of cognition cycle. B1 evaluates word and phrase bindings to form dialog states. B2 is responsible for creating action requests based on binding and dialog state.