Answer: a
Explanation: Interlayer signaling allows signaling information to pass from layer to layer along with packet flow. The processing path in the protocol stack may pass from top to bottom or from bottom to top. This is not suitable for cross-layer implementation since it requires instant signaling.

Answer: d
Explanation: Direct Interlayer Communication provides shortcuts between layers that are performed out of the band. Cross-Layer Signalling Shortcuts support the exchange of messages between non-adjacent layers eliminating the need for processing at each layer.

3. Which among the following is false about the CLASS approach?
a) Eliminates insertion of signaling information
b) Supports only unidirectional communication
c) Reduce overhead
d) Eliminate interception of packet at non-destination layer
View Answer

Answer: c
Explanation: The Central cross-layer plane is the most popularly used implementation of cross-layer design concept. It can be implemented as a shared database. Otherwise, each protocol layer creates separate interfaces for its internal protocol parameters and functions.

5. Which among the following is not a disadvantage ICMP protocol for direct inter layer communication?
a) IP headers are included
b) High protocol processing overhead
c) Limited to request-respond action
d) Loss of message packet cannot be identified
View Answer

Answer: d
Explanation: ICMP protocol has a large protocol header and protocol processing overhead. It is limited to request-response actions. However, cross-layer design demands for asynchronous communication. This can be overcome by creating a call back function with a procedure suited to the needs of the layers under consideration.

6. Which among the following is not a cross-layer design challenge associated with the lower layer of the protocol stack?
a) Topology configuration
b) Interference mitigation
c) Cooperative sensing
d) Energy consumption
View Answer

Answer: a
Explanation: Spectrum sensing is capable of detecting interference only at the transmitters. Interference measurements should be shared to identify the amount of interference at other users and receivers. This is carried out by cooperative sensing. However cooperative sensing generates large communication overhead that leads to reduced performance in terms of channel capacity and energy consumption.

Answer: c
Explanation: If a route between two xG users causes interference to surrounding primary users, it might affect the end-to-end latency or might cause packet loss along the route. This could be overcome by using multiple spectrum interfaces at intermediary nodes which introduces multiple hops in a route.

Answer: b
Explanation: Explicit congestion notification informs about network congestion to end devices without dropping packets. It is possible only when the end devices and the underlying infrastructure support ECN. The procedure involves marking a bit in the IP header to indicate upcoming congestion.

9. Which among the following is not a challenge for spectrum sensing?
a) Continuous sensing of spectrum
b) Energy consumption
c) Switching between sensing and transmission
d) Limit sensing when a single radio is deployed
View Answer

Answer: d
Explanation: Radio cannot sense the entire available spectrum continuously. An upper limit is established on energy consumption for a period of time. Thus accurate spectrum knowledge is unavailable at all times. Cross-layer interaction is required for switching between transmissions and sensing operations during in-band sensing operation.

10. Which among the following accounts for the additional routing costs generated for cross-layer information processing?
a) Security
b) Processing efficiency
c) Latency
d) Delay
View Answer

Answer: b
Explanation: Processing efficiency accounts for the additional routing costs applicable for cross-layer information processing. It especially affects the high speed links where only the time to live field of a packet is decreased to ensure fast processing of packets.

11. Re-routing with cross-layer design is more efficient due to the availability of sensing information.
a) True
b) False
View Answer

Answer: a
Explanation: The sensing information from the physical layer helps the intermediary nodes to construct better routes. The triggering event for a packet loss can be rightly identified as link failure or node failure with sensing information. 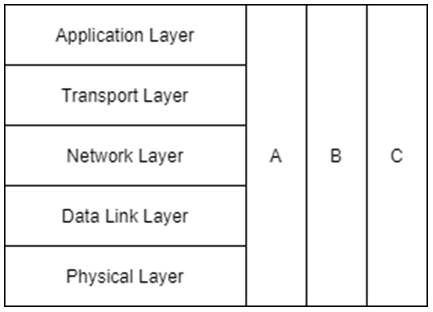 Answer: c
Explanation: Cross layer implementation on node level is desired to alter the threshold on individual wireless connections, to dynamically limit resources available at the MAC layer, and to improve the error performance of encoding schemes. Cross-layer implementation on the network level is desired to improve the quality of service and effective usage of resources.