1. Which among the following does not cause performance degradation on TCP level?
a) Link error
b) Packet loss
c) Admission control
d) Access delay
View Answer

Answer: d
Explanation: Transmission Control Protocol is a connection oriented, reliable, end to end protocol of the transport layer. TCP generally exhibits performance degradation in wireless networks due to a high packet loss rate. Cognitive radio introduces new challenges such as interruption due to loss of availability of a channel.

3. Which among the following factors influence round trip time?
a) Access technology
b) Power efficiency
c) Cost
d) Frequency of operation
View Answer

Answer: d
Explanation: Round trip time depends on the frequency of operation. An increased number of link layer retransmissions is required to send a packet across the wireless channel when a high packet error rate is observed at a particular frequency band.

5. Which among the following increases with an increase in spectrum handoff latency?
a) Overhead
b) Time of arrival
c) Round trip time
d) Link layer delay
View Answer

Answer: a
Explanation: In multipath routing, the multiple paths are discovered first. The routes are evaluated on route metrics such as delay and link stability, and then the node selects a route for transmission. One approach is to employ dynamic source routing for route discovery. Multipath routing suits the dynamic nature of cognitive networks and exhibits increased efficiency.

Answer: d
Explanation: In the location coordination scheme, multihop paths are created, where intermediary nodes might select an identical frequency band. It results in increased switching delay. This can be avoided by introducing a scheduling mechanism such as polling.

Answer: a
Explanation: Spectrum aware routing operates with global knowledge as well as with local knowledge. Each user is aware of another user when global knowledge is available. Otherwise each user constructs spectrum routes using spectrum availability information obtained locally by distributed protocol.

Answer: b
Explanation: Based utility attack involves the modification of characteristics of function parameters to obtain more bandwidth. It increases the amount of delay in the network. It is observed in the data link layer.

12. A key depletion attack is a malicious attack on the network layer.
a) True
b) False
View Answer

Answer: b
Explanation: The key depletion attack is a malicious attack on the transport layer. It is employed to destruct the underlying cipher system. It leads to the degradation of the efficiency of communication.

13. What type of mechanism is exhibited in the following diagram? 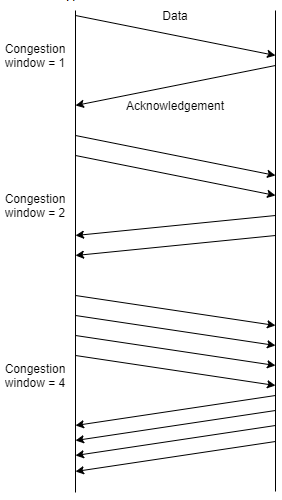 Answer: a
Explanation: The slow start mechanism involves starting the communication with a minimum number of packets. On receiving an acknowledgment, the amount of packets is doubled. This is continued until the number the packets reach the receiver’s buffer limit or until congestion is detected.

To practice all areas of Cognitive Radio for online tests, here is complete set of 1000+ Multiple Choice Questions and Answers.