1. Which among the following is achieved by applying horizontal cognition component s in inference hierarchy?
a) Radio skills are embedded
b) Context cluster is developed
c) Hierarchy is demolished
d) Hierarchy is established
View Answer

Answer: c
Explanation: The horizontal cognition components control radio personalities. It is carried out during the observe phase and the orient phase of the wake cycle. The radio skills are included in active data structures during the process of training or sleeping.

Answer: d
Explanation: The specify-explore-refine models are continually compared to their associated phase in the hierarchical structure. This enables the model to respond on time and to take immediate action. This is primarily due to the lack of logical dependencies among components.

Answer: b
Explanation: The conversion of atomic stimuli into atomic symbols by using a sensory pre-processing subsystem. Advanced signal and video processing tools are required to isolate atomic symbols in industrial cognitive radio.

5. When does the extraction of primitive sequence from higher aggregates is carried out?
a) Wake cycle
b) Prayer cycle
c) Sleep cycle
d) Live cycle
View Answer

Answer: c
Explanation: The formation of atomic symbols can take place by two procedures. The atomic stimuli may combine to form atomic symbol. The atomic symbols may also be formed by learning from higher aggregates. The first type occurs during wake cycle while the second is carried out during sleep cycle.

6. Which phase is responsible for fast retrieval of data?
a) Act
b) Plan
c) Decide
d) Observe
View Answer

Answer: d
Explanation: The radio skills obtained by horizontal cognition components associated with each phase are saved in radio knowledge representation language (RKRL) frame. The skill sets are also developed by information from a priori knowledge which is available in the form of RKRL frames.

9. Which among the following is not a class of knowledge required for constructing inference hierarchies?
a) Informal model
b) Axiomatic model
c) Ontology model
d) Behavioural model
View Answer

10. A white space may act as a boundary to derive primitive sequence.
a) True
b) False
View Answer

Answer: b
Explanation: An XTAG system is a grammar development tool based on Tree Adjoining Grammar (TAG). It consists of a parser, an X-window grammar development interface, and a morphological analyser. Other tools include SNeps , AGFL, and PC KIMMO which may be employed for natural language processing.

12. How does the cognitive radio access the a priori models?
a) Chat box
b) Handshake mechanism
c) Requests
d) Mappings
View Answer

Answer: d
Explanation: The cognitive radio access the a priori models using mappings that exist between the word, phrase, dialog, and scene levels of the observation phase hierarchy and the encapsulated speech components.

13. Choose the appropriate labels to complete the diagram. 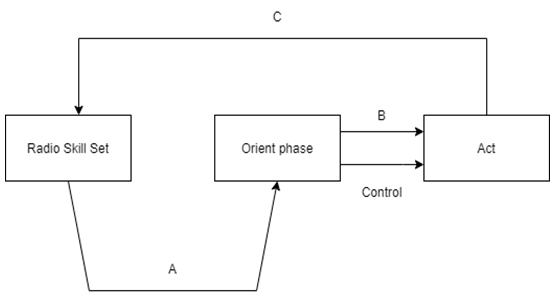 Answer: a
Explanation: The diagram depicts the steps involved in the application and improvement of radio skills. The radio skills developed from static and active knowledge available in observe phase is used to control radio personalities. The radio skill model is also continually updated by using information from act phase.

To practice MCQs on all areas of Cognitive Radio, here is complete set of 1000+ Multiple Choice Questions and Answers.