1. Which among the following is not used as an attribute for classifying spectrum sharing?
a) Architecture
b) Spectrum allocation behaviour
c) Spectrum access technique
d) Spectrum sensing behaviour
View Answer

Answer: c
Explanation: Cooperative spectrum sharing studies the effect of communication of one node on other nodes. It also involves distributing the interference measurements among the users in the network. This information is utilized by spectrum allocation algorithms which provide spectrum access to users.

Answer: b
Explanation: Non-cooperative spectrum sharing only considers the communication of the one particular node. Due to the lack of information about other users, it exhibits reduced spectrum utilization. However due to minimal communication requirements, it is suitable for certain resource-constrained practical applications.

Answer: b
Explanation: Underlay spectrum sharing technique employs spread spectrum techniques while transmitting in the licensed portion of the spectrum band. Spread spectrum involves stretching a signal over a bandwidth which is wider than its original bandwidth. Therefore bandwidth utilization and interference towards the primary user is increased.

7. Which among the following has to be carried out after the spectrum is allocated for communication?
a) Listen for the arrival of the primary user
b) Handshake mechanism between transmitter and receiver
c) Estimate the duration of communication
d) Forward interference information to spectrum broker
View Answer

Answer: b
Explanation: The selected portion of the spectrum must be informed to the receiver of data. This is accomplished by invoking a transmitter-receiver handshake protocol that is used for effective communication in xG networks.

8. Which among the following is not a step in spectrum sharing?
a) Spectrum sensing
b) Spectrum mobility
c) Spectrum access
d) Spectrum management
View Answer

Answer: d
Explanation: Spectrum sharing process is integrated with spectrum sensing, spectrum allocation, spectrum access, handshake mechanism, and spectrum mobility. Thus the selection of best available spectrum, prevention of collision due to the overlapping portion of the spectrum, and seamless connection for communication regardless of the location of the user involves spectrum sharing.

9. Which among the following layer operation is similar to that of spectrum sharing?
a) Physical
b) Data-link
c) Network
d) Transport
View Answer

10. Which among the following is a constraint observed in hardware constrained MAC protocol for cognitive radio networks?
a) Hidden terminal problem
b) Synchronization among xG users
c) Synchronization between xG user and primary user
d) Shadowing uncertainty
View Answer

11. Transmitter-receiver handshake does not involve any central entity such as the primary base-station.
a) True
b) False
View Answer

Answer: b
Explanation: The transmitter-receiver handshake conveys the selected spectrum for communication to the receiver. This protocol is not limited between a transmitter and a receiver and may also include external entities such as a primary base-station especially in methods such as cooperative spectrum sharing.

12. Which among the following terms should replace the label ‘A’? 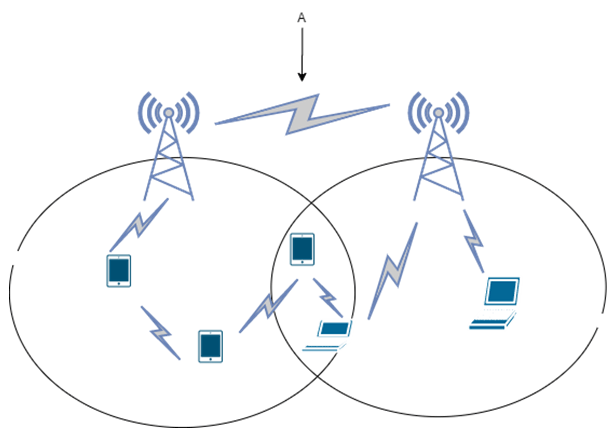 Answer: b
Explanation: xG networks are generally overlapped to maximize the opportunistic usage of a licensed spectrum band. An example of a centralized inter-network approach is the common spectrum coordination channel protocol designed to support the combined existence of IEEE 802.11b and IEEE 802.16a.