1. Which among the following is not a part of the cognition subsystem?
a) Inference hierarchy
b) Cognition cycle
c) Organisation
d) Channel state
View Answer

2. How does the cognition cycle operate?
a) Active
b) Reactive
c) Passive
d) Activated
View Answer

Answer: b
Explanation:The cognition cycle carries out its functions in a reactive sequence. Stimuli from the outside world are accepted by the sensors. The information is passed to the cognition cycle to generate a response.

Answer: a
Explanation: The waking behaviour supports real time interaction with user and obtains real time input from the environment. It is also referred to as awake-state. However it does not imply a fixed state but a collection of behaviours.

4. What type of control is exhibited by awake-state of cognition subsystem?
a) Temporally different
b) Isochronous
c) Asynchronous
d) Serial
View Answer

Answer: b
Explanation: The awake-state or waking behaviour controls the cognitive radio resources isochronously. It maps the stored environmental interactions to the present input-response case being operated. Machine learning converts these interactions and cases into knowledge.

5. Which among the following modes should be invoked when a considerable period of disuse is expected?
a) Off
b) Prayer
c) Sleeping
d) On
View Answer

Answer: d
Explanation: Prayer behaviour resolves conflict with the help of home network. The conflict is presented to the network using Knowledge Query and Manipulation Language. If the conflict is resolved, it is integrated into overall knowledge.

9. The entrance of a stimulus invokes a new cognition cycle.
a) True
b) False
View Answer

Answer: a
Explanation: The entrance of a stimulus invokes a new cognition cycle during the waking behaviour. It is also invoked by the completion of cognition cycle which was already in process. The stimulus is obtained by monitoring the information signals such as voices, images, radio signals, etc.

10. Match the numbered blocks with the correct word to complete the cognition cycle. 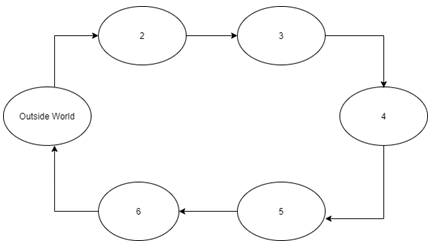 Answer: d
Explanation: The major states or phases of the cognition cycle are observe, orient, plan, decide, and act respectively. The flow of control moves from observation to action. Certain situations demand for parallel operation of all states.