Answer: b
Explanation: Primary users are licensed users of the spectrum. Primary base-station refers to the fixed infrastructure network component with a spectrum license. The primary base-station contains legacy protocols and xG protocols for supporting communication through xG networks.

Answer: b
Explanation: The xG network is also known as the secondary network, unlicensed network, cognitive radio network and dynamic spectrum access network. The xG does not have an exclusive right to use any spectrum band. xG networks aim to make use of temporarily unused spectrum bands.

Get Free Certificate of Merit in Cognitive Radio Now!

Answer: a
Explanation: xG networks are made up of both infrastructure networks as well as ad hoc networks. xG users exist in a mixed spectrum environment and possess additional features to transmit on the licensed band. The path between the sender and the receiver depends on the type of network.

Answer: a
Explanation: xG base-station is capable of providing single hop connection for xG users accessing the licensed portion of the spectrum. It is similar to a primary base-station with fixed network infrastructure network components however it has additional xG capabilities.

Answer: c
Explanation: Spectrum broker is responsible for sharing the spectrum resources among the different users of the xG network. It also works as an information manager supporting the combined operation of several xG networks. A spectrum broker is connected to each network in an area for coordinated operation.

Answer: a
Explanation: xG architecture exists in a mixed spectrum environment with licensed and unlicensed bands. Wideband access technology allows xG users to operate on both bands. xG users can communicate by using a base-station or by opting for a multi-hop connection.

11. The primary user must contain legacy protocols and xG protocols for xG communication.
a) True
b) False
View Answer

Answer: b
Explanation: Primary users do not undergo any modification to support xG base-stations and xG users. The operation of the primary user should not be hindered by unlicensed users. Similarly the xG users operating on the licensed band should not affect other primary users.

12. Which type of connection is depicted in the following diagram? 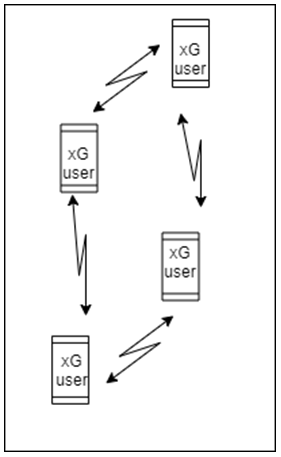