Answer: b
Explanation: The function of the act phase is to engage in contact with outside world by composing messages for interaction with the local environment. The message may also have to be transferred to another cognitive radio or to a cognitive node.

2. Which among the following may be used to represent information that is continuously changing?
a) Knowledge Manipulation Language
b) Web Ontology Language
c) RoXen Macro Language
d) Radio eXtensibleMarkup Language
View Answer

Answer: b
Explanation: Web Ontology Language is a family of knowledge representation languages for developing ontologies. Ontologies are similar in structure to class hierarchies in object-oriented programming. Ontologies are suitable for information that changes continuously such as the data found on the Internet.

Answer: b
Explanation: Ontology in Web Ontology Language is composed of individuals and property assertions that associate the individuals to each other. The ontology is controlled by axioms that assign constraints on individuals and their relationship.

Answer: b
Explanation: Knowledge based Query and Manipulation language supports communication among software agents and knowledge based systems. The KQML message format and protocol allows a radio to perform operations and utilize the knowledge available in another radio.

5. What is the purpose of knowledge based system?
a) To explicitly describe knowledge
b) To accumulate large database
c) To recycle data
d) To develop languages
View Answer

Answer: a
Explanation: Knowledge based system is a computer program that provides solution to complex problems by using knowledge and reasoning. It is important that the knowledge is described explicitly. This assists easy application of reasoning to new knowledge.

6. Which statement is used to encapsulate the introduction of a new model into the existing models?
a) <iCRplatform/>
b) <Self/>
c) <Self>
d) <iCRplatform>
View Answer

Answer: b
Explanation: The act phase introduces new models to internal structures and updates existing model. The addition of new specify-explore-refine model is encapsulated by the statement <Self/>. Knowledge acquisition in act phase generates data structures.

Answer: a
Explanation: The act stage activates operations with pre-fixed amount of resources and time. The knowledge representation depends on the radio resources, and radio knowledge being applied to the parameters contributing to the process.

Answer: c
Explanation: Self-monitoring behaviour is required in a cognitive radio to ensure bounded usage of resources within bounded time. First order predicate calculus is avoided as it is not possible to determine the period of completion. Bounded iterations whose completion time is independent of the calculation of iteration control of the loop.

9. Learning is a function of perception.
a) True
b) False
View Answer

Answer: a
Explanation: Learning is a function of perception, observation, decision, and action. Learning also occurs by the introduction of new specific-explore-refine models to existing structure. Learning involves the comparison of prior and current states.

10. Which among the following options should replace the block labelled ‘A’? 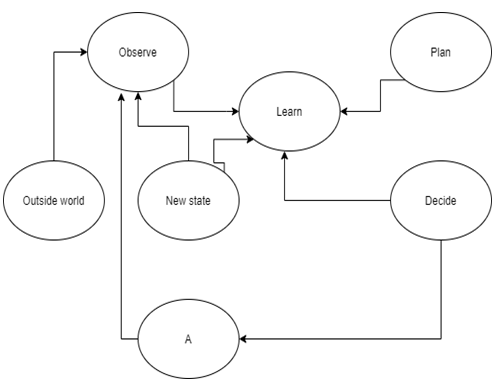 Answer: c
Explanation: Prior state exists between decide phase and observe phase. The prior state works with current state to determine the effectiveness of a communication mode. It is also used to associate RF mode in accordance to the specific-explore-refine model.