1. Which among the following processes is required to extend radio adaption beyond predefined knowledge?
a) Sorting
b) Knowledge acquisition
c) Reasoning
d) Learning
View Answer

Answer: d
Explanation: The reasoning engine is responsible for applying the gathered knowledge in accordance with the current state of the system. However, the reactions will be limited to previously defined knowledge even under new situations. Learning provides the ability to study input, identify patterns, and modify the operation of the radio system as per the demands of the situations.

2. Which among the following processes under learning action initiates a change in the action selection policy?
a) Observation of state of the radio system
b) Decision making in reasoning engine
c) Analyses of the outcome of the decision selected by the reasoning engine
d) Modification of knowledge base
View Answer

Answer: a
Explanation: Behavioural knowledge involves actions and their effect on the knowledge system. Both internal and external effectors altering the system and the environment are included. An event begins with a set of assertions and terminates with a varying set of assertions.

5. Which among the following is a benefit of symbolic knowledge representation?
a) No encryption is required
b) Fast translation
c) Less memory storage
d) Easy human comprehension
View Answer

6. Which among the following is not used for symbolic knowledge representation?
a) Interface
b) Objects
c) Semantic nets
d) Frames
View Answer

Answer: a
Explanation: In symbolic representation and reasoning systems, storage is performed using extensible data structures to capture facts, descriptions, and properties related to a concept. Semantic nets, rules, frames, and objects are some of the structures employed to represent knowledge.

Answer: c
Explanation: Learning in ontology based system involves integrating new knowledge with existing collection of entries in memory. A classifier is used to assess the degree of similarity between a new entry and the existing entries. The classifier accomplishes this by analyzing the properties and values of a new entry.

9. What is the parameter of analysis in reinforcement learning?
a) Number of requests during wake cycle
b) Number of processes to achieve final outcome
c) Degree of failure
d) Degree of success
View Answer

Answer: d
Explanation: Reinforcement based learning assigns a weightage to an action on the basis of the degree of success of its outcome. When situations requiring similar action arise, the weightage associated with an action is analyzed for compatibility. The degree of success is computed by measuring the closeness of the obtained outcome with the expected outcome.

10. Which among the following statements provides the difference between reinforcement-based learning and temporal difference technique?
a) State represented by a directed graph
b) Assignment of weightage to an action on the basis of the degree of success
c) Computation of degree of success
d) Priori model of the sequence of possible states
View Answer

11. Which among the following is not a challenge of employing reasoning and learning stage in the cognitive radio?
a) Computational requirement
b) Quality of Service
c) Edge conditions
d) Predictable behaviour
View Answer

Answer: b
Explanation: Cognitive radio should provide a large amount of computational resources to achieve the results of each operation. Edge conditions refer to the devices which are positioned in a location without regular service and hence cannot benefit from learning techniques. Predictable behaviour refers to the ability to estimate the outcome of each step of the operation but not the final outcome.

12. Which among the following is not a challenge for case based reasoning implementation?
a) Memory
b) Fixed ontology and knowledge representation
c) Pattern matching
d) Accuracy of reasoning
View Answer

Answer: b
Explanation: Case based reasoning requires a large case database. It requires a large amount of computational resources for pattern matching and to modify the solution of a close match to satisfy the current problem. Case based reasoning can be implemented in any system provided it has large memory and processing power regardless of ontology and knowledge representation.

13. Which among the following options should replace the label ‘A’, ‘B’, and ‘C’ in rule based system? 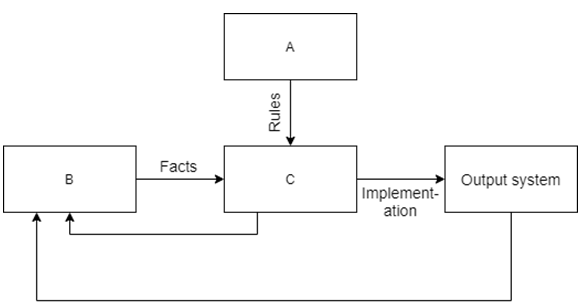 Answer: c
Explanation: The knowledge base of the rule based system is composed of rules specified in the form of “if-then” clauses. The memory unit consists of the current state of the system. The inference engine is responsible for pattern matching.

14. Temporal reasoning allows a system to reason about its operational characteristics at discrete points in time.
a) True
b) False
View Answer

Answer: b
Explanation: Temporal reasoning allows a system to reason about its operational characteristics during an interval of time. For example, spectrum sensing over a period can help identify intervals of spectrum underutilization within that period of time.