This set of Cognitive Radio Question Bank focuses on “The xG Network Architecture – 2”.

1. What is the function of the xG network in the licensed band?
a) Exploit unused spectrum holes
b) Route xG users
c) Route primary users
d) Manage information for primary users
View Answer

Answer: a
Explanation: The xG users on the xG network exploit the unused spectrum holes that are available for a limited time in the licensed spectrum band. This may be carried out by applying various cognitive communication techniques.

4. What is the terminology used to refer to the transfer of users from one spectrum to another spectrum?
a) Spectrum routing
b) Mobile routing
c) Mobile handoff
d) Spectrum handoff
View Answer

Answer: d
Explanation: If a primary user returns to a spectrum band currently being used by an xG user, the xG user should remove itself from the spectrum and continue operating in a different spectrum band immediately. This is referred to as spectrum handoff.

5. Which among the following relies on efficient allocation of spectrum?
a) Effective multiplexing
b) Effective modulation
c) Capacity of open spectrum access
d) Diversity
View Answer

Answer: c
Explanation: Factors such as the capacity of open spectrum access and quality of service rely on the ability of a radio to efficiently allocate radio spectrum. xG network architecture aims for effective use of unlicensed spectrum band which have multiple heterogeneous networks.

Participate in Cognitive Radio Certification Contest of the Month Now!

Answer: a
Explanation: xG users compete to access the unlicensed spectrum band since every user has an equal right to access the spectrum. Intelligent spectrum sharing algorithms ensure effective spectrum usage and good quality of service. If many xG networks are present, impartial sharing on a network level is required.

8. Which among the following may not be achieved by using xG networks for military applications?
a) Select intermediate frequency bandwidth
b) Improve security
c) Select compatible modulation scheme
d) Reduce interference
View Answer

Answer: d
Explanation: xG networks allow the selection of intermediate frequency bandwidth, and compatible modulation and coding techniques. It is capable of adapting to the changing radio environment of a battlefield. xG networks also carry out secure spectrum handoff.

9. Which among the following is a requirement of emergency networks?
a) Quality of service
b) Determine of charges for usage
c) Minimum latency
d) Parsing incoming information
View Answer

Answer: c
Explanation: Emergency networks require minimum latency, and a large radio spectrum to accommodate a high volume of traffic including voice, video, and data. Since xG networks do not rely entirely on fixed infrastructure for communication and are capable of utilizing unused spectrum bands, they are used for reliable communication under emergency conditions.

10. Which among the following is a requirement of a cognitive mesh network?
a) Large spectrum
b) Quality of service
c) Security
d) Effective modulation scheme
View Answer

11. Which among the following is not true about Mobile Virtual Network Operator?
a) MVNO owns wireless infrastructure
b) MVNO purchases infrastructure at retail price
c) MVNO is a form of leased network
d) MVNO might operate with mobile virtual network enabler
View Answer

Answer: d
Explanation: Mobile Virtual Network Operator does not own wireless network infrastructure. It purchases network services from a mobile network operator. In this method, the primary network provides opportunistic access to licensed spectrum. This is an example of leased network implementation in xG architecture.

Answer: a
Explanation: xG networks allow usage of spectrum band without a fixed infrastructure by maintaining communication priority and response time. It is also capable of adding a temporary or permanent spectrum to infrastructure links that are used for relaying traffic.

13. What type of network is depicted in the following diagram? 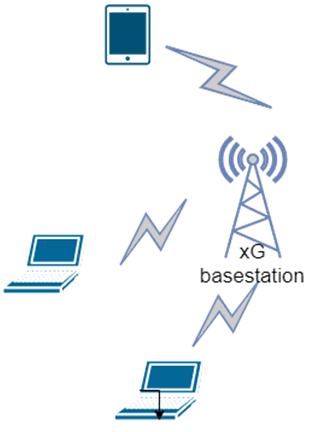