Answer: a
Explanation: The inference hierarchy organises the information from observation to action phase in the corresponding data structures. It aids in including machine learning with real-time performance during the wake epoch.

2. Which among the following occupies the bottom most position in inference hierarchy?
a) Primitive stimuli
b) Atomic symbols
c) Primitive symbols
d) Atomic stimuli
View Answer

Answer: d
Explanation: Atomic stimuli refer to the external signals available from the outside world in unprocessed form. It includes the RF, image, location, and acoustic information that enter from the outside environment.

4. Which among the following is obtained by collection of atomic symbols?
a) Aggregated sequence
b) Atomic sequence
c) Primitive sequence
d) Primary sequence
View Answer

Answer: c
Explanation: Primitive sequence is formed by assembling similar atomic symbols in a coherent manner. Primitive sequences generally have spatial or temporal likeliness which is visible and can be identified from a heap of information.

5. Which is the primitive sequence equivalent of text?
a) Sentence
b) Paragraph
c) Word
d) Character
View Answer

Answer: c
Explanation: Primitive sequence is formed by assembling similar atomic symbols in a coherent manner. Words that compose a text, tokens that form speech in a speech composer, and objects that form an image are examples of primitive sequence in their respective domains.

6. What is the capability of a basic sequence?
a) Communicate message with meaning
b) Construct a word
c) Identify useful information from data
d) Collect data
View Answer

7. What is the visual information equivalent of a basic sequence?
a) Blob
b) Object
c) Image
d) Video clip
View Answer

8. Which among the following is concerned with syntax and semantics of information?
a) Sequence cluster
b) Basic sequence
c) Primitive sequence
d) Atomic symbols
View Answer

Answer: a
Explanation: Sequence clusters are developed on the basis of shared properties. Knowledge discovery and data mining (KDD) and the semantic web provide various means for defining or determining sequence clusters from basic and primitive sequence.

11. The identification of “baseball” from words such as “hit”, “pitch”, and “run” is possible only by the functionality level of context cluster.
a) True
b) False
View Answer

Answer: b
Explanation: Sequence cluster is capable of determining themes from basic sequences that share similar characteristics. The capability of context cluster is to comprehend a discussion on baseball and draw conclusions based on the actions of the user.

12. What is the minimum requirement for taxonomy on radio knowledge?
a) Speed
b) Approximate models
c) Abstraction
d) Polymorphism
View Answer

Answer: c
Explanation: Abstraction includes the construction of formal and informal models of meta- knowledge ranging from concepts to structured mathematical models of space, time, and frequency. Taxonomy requires a hierarchical model capturing the physical world as well as the internal structure radio.

13. Which among the following may be used for processing speech channels?
a) Symbol processing
b) Natural Language processing
c) Speech synthesiser
d) Text synthesiser
View Answer

14. XTAG caters to the requirement of cognitive radio.
a) True
b) False
View Answer

Answer: b
Explanation: Cognitive radio should initiate transmission when it receives a command “transmit” with an attached message. However XTAG abilities only allow differentiating a verb from a noun but it cannot comprehend the meaning of a command and initiate action.

15. Which among the following option should replace the block labelled “B”? 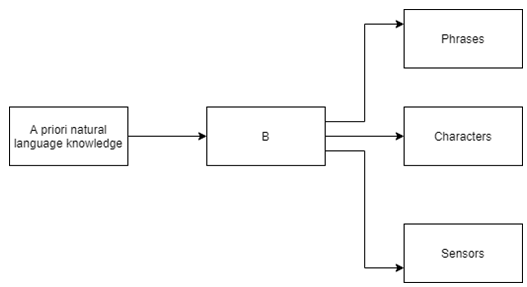