1. Which among the following stages has to be selected after the orient stage when detailed analysis has to be carried out to determine the course of action?
a) Observe
b) Plan
c) Decide
d) Act
View Answer

Answer: b
Explanation: In planning stage, the information collected and organised during the observe phase and the orient phase are used to generate an action plan. By choosing planning stage, the process is carried out in a deliberated and calculated manner.

3. Which among the following techniques are used for reasoning?
a) Plan calculus
b) Plan sequence
c) Plan series
d) Plan theory
View Answer

Answer: a
Explanation: Plan calculus applies reasoning over time, user identity, space, and context. It offers information such as when and where. It also provides the context, and reports internal requests. The context may involve location, action, state of existence, etc.

4. Which among the following function is used in the plan phase?
a) User sensory perception
b) Cognition function
c) Local effectors
d) System application
View Answer

Answer: c
Explanation: The set of actions selected by the plan phase are performed by local effector functions. Each action is mapped as a request by plan calculus. Plan calculus generates and compares plans and finds conflicts.

5. Which among the following is the building block of causal tool?
a) Graph theory
b) Probability
c) Logic
d) Variables
View Answer

Answer: d
Explanation: Variables are the building blocks of causal models. The values may represent the likelihood of occurrence of an event, a characteristic of an individual, the population of a system, or any quantitative value. Language, logic, probability, and graphs are tools used for developing causal models.

Answer: d
Explanation: The decide phase selects from a number of options generated by the planning phase. It is responsible for allocating computational and radio resources to support software in accordance to the activated plan.

Answer: a
Explanation: Autonomous decisions are taken when the correlation between present and reference condition is high. It is preferred when the radio has been operated previously in the same spatial-temporal context. Knowledge representation depends on the radio procedure components.

Answer: d
Explanation: Tentative decisions are consulted with the user for confirmation before execution. This leads to better user experience in the future. In certain situations, the selected option is executed and the user interaction is recorded to resolve conflict.

9. The decision phase controls the timing of alerts in a radio.
a) True
b) False
View Answer

Answer: a
Explanation: Other than selecting a particular option from a set of plans, the decision phase chooses the timing to alert a user. It might alert immediately or put off the interruption according to the circumstances of the user (such as until after a meeting).

10. Which among the following options should replace the block labelled ‘A’? 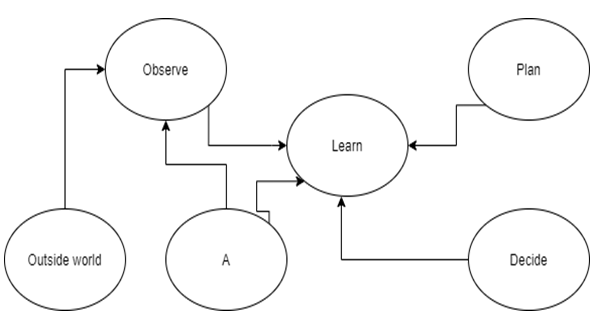 Answer: a
Explanation: New states are established when new models are introduced in addition to the existing internal structure. It influences observe phase and learn phase. New states are constantly included by integrating knowledge into RXML knowledge structures.