1. Which among the following is not a component of hardware defined radio?
a) Demodulator
b) Antenna
c) Filters
d) Analog to digital converter
View Answer

Answer: d
Explanation: A typical hardware defined radio used as a frequency modulated/ amplitude modulated broadcast receiver consists of radio hardware such as antenna, filters, and demodulators. The primary function is the conversion of radio signals into audio signals.

Answer: d
Explanation: The progression from hardware defined radio to software radio is marked by the introduction of the analog-to-digital converter and digital-to-analog converter in radio. An ideal software radio performs operations such as modulation, demodulation, frequency translation, and filtering digitally.

Answer: c
Explanation: The software defined radio desirably operates over a large range of frequencies that cover various bands of the spectrum. The radio should be capable of supporting various applications such as TV bands, air traffic control bands, industrial medical and scientific bands, etc. For example, 30 MHz – 2.5 GHz has a bandwidth of 2.47 GHz which is most suitable for the spectrum requirements of cognitive radio.

Answer: c
Explanation: The nature of RF devices such as antennas and filters normally support narrowband RF synthesis and intermediate frequency conversion. Wideband operation drives up cost and power consumption. One approach involves the installation of multiple single band RF chips in a handset. This handset is called as a slice radio or a Velcro radio.

6. Which among the following is considered as the most power-efficient device?
a) ASIC
b) FPGA
c) DSP
d) GPP
View Answer

Answer: c
Explanation: Digital signal processors are simple to program, cost-effective, and power-efficient when compared to other devices such as ASIC and FGPA. However small memory and complicated instruction set architecture can increase the re-programmability cost of a digital signal processor.

7. How are the general purpose processors classified?
a) Based on memory
b) Based on bus
c) Based on interface
d) Based on instruction set
View Answer

8. Which among the following is not an API of the software communication architecture put forth by the SDR forum?
a) Physical
b) MAC
c) Security
d) Transport
View Answer

Answer: d
Explanation: An application programming interface is a computing interface that connects to a software component or a system. Components may access the API as per the terms presented by the API itself. In software communication architecture, API determines access to the physical layer, to the logical link layer, to the medium access control layer, to the security features, and to the input/output components.

10. Which among the following is given as input to the system control unit?
a) Human-machine interface
b) Global framework
c) Fault management
d) Configuration management
View Answer

Answer: a
Explanation: System control resembles a framework. It contains a set of basic functions that are arranged in the form of a computational architecture in accordance with the norms of CORBA. It accepts input from the human-machine interface unit and overlooks the management of virtual channels, networks, security, etc.

11. Which among the following correspond to the point plotted in the graph? 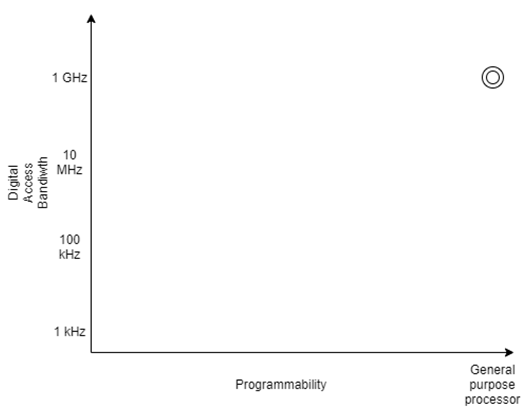