This set of Separation Processes Interview Questions and Answers focuses on “Separations by Phase Additions or Creations”.

1. What is the role of Energy-separating agent (ESA)?
a) Involves heat transfer
b) Involves mass transfer
c) Acts as an agitator
d) Is a catalyst
View Answer

Answer: a
Explanation: The role of ESA is to perform heat transfer. Example: Creation of vapor from liquid phase by reducing pressure.
advertisement

2. Which of the following is NOT a disadvantages of using a mass-separating agent (MSA) ?
a) Need for additional separator to remove MSA
b) Possible MSA contamination
c) Difficult design procedures
d) Need for large quantities of MSA
View Answer

Answer: d
Explanation: There is no need for large quantities of MSA and the quantities are defined by the amount of feed.

3. Which separation process is used when the volatility differences is too small between the species?
a) Flash vaporization
b) Stripping
c) Extractive distillation
d) Liquid-Liquid extraction
View Answer

Answer: c
Explanation: Extractive distillation is used where a miscible MSA increases the volatility difference between the components.

4. What is added when it is difficult to condense vapors leaving the distillation column at top?
a) Adsorbent
b) Absorbent
c) Agitator
d) ESA
View Answer

Answer: b
Explanation: The absorbent help to condense the vapor leaving the distillation column.

Answer: c
Explanation: Reboiled absorption shall be used since it is difficult to condense the ethane vapors leaving from the top.
advertisement
advertisement

6. Which separation technique shall be employed to separate acetone and methanol?
a) Extractive distillation
b) Stripping
c) Liquid-Liquid extraction
d) Evaporation
View Answer

Answer: a
Explanation: Extractive distillation shall be used here since the volatility difference is very small.

Answer: c
Explanation: In the separation of acetic acid with water, -butyl acetate is added which acts as an entrainer and forms two liquid, minimum boiling point azeotrope with water. It is then overhead and condensed and separated in acetate and water layers.

Answer: d
Explanation: When the liquid mixture is temperature sensitive, liquid-liquid extraction is used by adding a solvent that selectively dissolves in one of the liquids.

9. Which of the following solvents can be added during separation of Isopropyl alcohol and water?
a) Methanol
b) Ethanol
c) Benzene
d) Alcoholic KOH
View Answer

Answer: c
Explanation: Benzene selectively dissolves in IPA and thus two layers are formed which can be separated using a separating funnel.
advertisement

10. How is sulphur separated from its impurities?
a) Desublimation
b) Sublimation
c) Crystallization
d) Drying
View Answer

Answer: b
Explanation: Sublimation is the technique used since sulphur can be sublimed and then condensed.

Answer: d
Explanation: Leaching is used in extraction of metals in metallurgical industry.

To practice all areas of Separation Processes for Interviews, here is complete set of 1000+ Multiple Choice Questions and Answers. 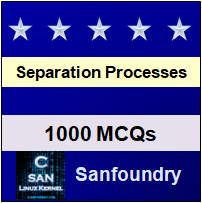