1. Viscosity is said to be internal friction between fluid layers. What type of force is it?
a) Electromagnetic
b) Gravitational
c) Weak Nuclear forces
d) Strong Nuclear forces
View Answer

Answer: a
Explanation: The viscous force is given by F = -ηAdv/dx. Where A is area of contact, η is coefficient of viscosity & dv/dx is velocity gradient (vel/dist). From this expression we get, η = -F(dx/dv)(1/A). Therefore the dimension of η is N*s*m-2 = Ns/m2.

4. Coefficient of viscosity doesn’t depend on temperature because it is a property of the fluid. True or False?
a) True
b) False
View Answer

5. The coefficient of viscosity is equal to the ratio of shear stress to shear strain. True or False?
a) True
b) False
View Answer

Answer: b
Explanation: Imagine a fluid element with its bottom layer having zero velocity and upper layer, at a height ‘h’, having velocity ‘v’. As the fluid moves, the bottom layer stays as it is, while the other layers will move relative to the bottom layer. So, the strain (=v*Δt/h) continuously increases with time. So we talk about strain rate (=v*Δt/h*Δt = v/h) and not about strain. And we say that stress is proportional to strain rate. Therefore the coefficient of viscosity is the ratio of stress & strain rate.

Answer: c
Explanation: In the case of liquids when temperature increases, viscosity decreases because it is the result of molecular bonds (electromagnetic forces) between particles which weaken due to random motion brought about by increase in temperature. In the case of gases, the molecules vibrate more randomly, leading to more obstruction in the path of bodies trying to move through it. And we interpret this increased obstruction as increased viscosity of the gas.

7. A block of mass 2kg is going down an incline over a fluid having some viscosity. The block moves with a constant speed of 5m/s. Assuming that the temperature of fluid remains constant, find the coefficient of viscosity of the fluid. Angle of incline is 30° & block is a cube of side 1m. Also given that the thickness of fluid is 1cm. 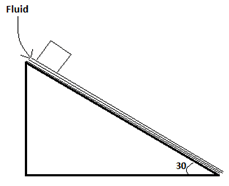 8. In a closed pipe of radius R, fluid (having some viscosity) is flowing laminarly. Which point along a cross section will have maximum speed?
a) Centre
b) Near the wall of pipe
c) R/2 from centre
d) All points will have same speed
View Answer

Answer: a
Explanation: We know that the shear strain rate is v/l, where v is velocity of layer and l is distance of that layer from layer having zero speed Here, the layer in contact with pipe wall will have zero speed. Therefore, the velocity will increase as one goes away from the wall and will be maximum at centre.

9. On which these factors does air/fluid resistance force, acting on a spherical body, not depend?
a) Radius of body
b) Velocity of body
c) Coefficient of viscosity
d) Density of body
View Answer

Answer: d
Explanation: Resistance force by a fluid on a body = 6πηrv, where η is coefficient of viscosity, r is radius of body & v is its velocity. This doesn’t depend on density.
Another way to think of this is to imagine a hollow and solid sphere of the same radius falling through air at the same speed. The resistance offered by air will be the same on both as they have the same surface area exposed and are moving at the same speed.