This set of Physics Problems for Class 11 focuses on “Thermal Properties of Matter – Change of State”.

1. Change of phase occurs at a constant temperature, which implies that even on addition of heat to a substance temperature remains constant. True or False?
a) True
b) False
View Answer 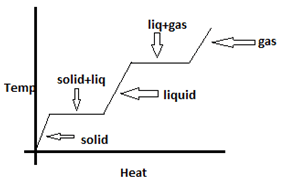 Answer: a
Explanation: Melting point is less for higher pressure. For eg: we can keep a small weight of 1kg on a block of ice and we will see that the ice underneath the block starts melting at a lower temperature.

Answer: b
Explanation: When increase in pressure causes water to melt. It may refreeze on removal of this extra pressure. This refreezing is called relegation.

4. What happens to the boiling point of water in a container when the container is completely closed by a lid?
a) Increases
b) Decreases
c) Remains same
d) Boiling point is characteristic of a substance
View Answer

5. Select the correct statement
a) On heating continuously a substance changes from solid to gas via liquid phase only
b) Change of phase occurs at variable temperature
c) Water can exist in all 3 phases
d) Boiling point increases with increase in pressure
View Answer

Answer: c
Explanation: Water can exist in all 3 phases that are in thermal equilibrium with each other. It is referred to as the triple point of water. When a substance is heated it may change directly from solid to gas. This is called sublimation. Boiling point increases with decrease in pressure. Change of phase occurs at constant pressure.

6. Getting burnt by steam is less dangerous than boiling water. True or False?
a) True
b) False
View Answer

Answer: b
Explanation: To make steam, water has to be boiled and then more heat energy has to be added to convert it into steam. So, steam is more dangerous than boiling water.

Answer: c
Explanation: For changing a solid into liquid, heat has to be supplied and this change occurs at constant temperature. Q = mL
⇒ 30 = 5L
⇒ L = 6 cal/g,

8. The diagram given below shows phase changes for a substance based on experimental observations. Select the correct statement. 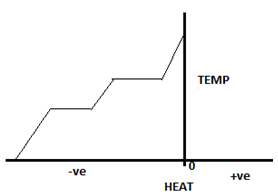 Answer: d
Explanation: The diagram represents phase change from solid to liquid to gas. Heat removal leads to decrease in temperature. The temperature becomes zero at an instant, so it can’t be in Kelvin as 0K has never been achieved. The two horizontal lines represent phase change as temperature remains constant at that time. 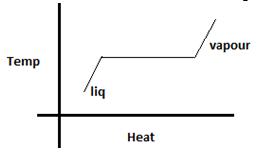 10. Select the correct statement for melting of any substance.
a) It occurs at the same temperature as that of vapourization
b) It is exothermic in nature
c) It occurs at 100°C
d) It requires heat to be supplied to the substance
View Answer

Answer: d
Explanation: Melting is the conversion of solid to liquid at constant temperature. It is endothermic and the melting temperature varies from substance to substance and also on atmospheric conditions like pressure.

To practice Physics Problems for Class 11, here is complete set of 1000+ Multiple Choice Questions and Answers.