1. Which of the following options is correct? 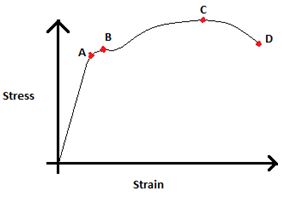 2. A material have a stress strain curve which can look similar to the equation y = x2 (for all x>0). True or False?
a) True
b) False
View Answer

Answer: a
Explanation: The stress strain curve of some elastic tissues of our bodies look similar to the curve represented by equation y = x2. For eg, the elastic tissue of aorta has a curve like: 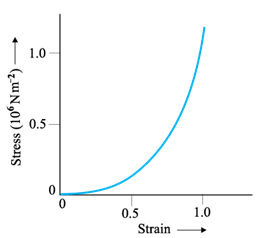 4. Which of the following statements is correct for ductile materials.
a) Large deformation takes place between elastic limit and fracture point
b) Have no proportional limit
c) Break immediately after proportional limit
d) Cannot be drawn into wires
View Answer

Answer: a
Explanation: Ductile materials are those which can be drawn into wires as they deform by a significant amount between elastic limit and fracture point. The stress-strain curve of a ductile material looks like: 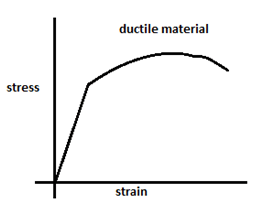 5. Which of the following statements is correct for brittle materials.
a) It breaks soon after elastic limit is crossed
b) It shows significant plastic deformation before breaking
c) It is used to make wires
d) Stress is never proportional to strain
View Answer

Answer: a
Explanation: Brittle materials break soon after elastic limit. They show no significant plastic deformation and hence can’t be used for making wires. Their stress-strain curve looks like: 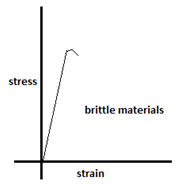 6. What does the area under the stress-strain curve represent?
a) Toughness
b) Total deformation
c) Modulus of elasticity
d) Average force applied
View Answer

Answer: a
Explanation: Area under the stress-strain curves represents toughness. Total deformation is given by the net strain multiplied by original length. Modulus of elasticity is the ratio of stress to strain under elastic limit.