This set of Physics Quiz Online for Class 11 focuses on “Oscillations – Velocity and Acceleration in Simple Harmonic Motion”.

Answer: b
Explanation: The force on a particle in SHM is always towards the mean position. The particle is currently going towards an extreme, thus velocity will be towards the amplitude.

4. The graph of acceleration vs time for a SHM is given. FInd the equation of position of the particle as a function of time. Assume that the particle is oscillating on the x-axis about the origin. And consider RHS of origin to be positive & LHS to be negative.

Answer: a
Explanation: For the particle in uniform circular motion, magnitude of velocity is constant, but direction is continuously changing. Thus, speed is constant but acceleration is non-zero.

7. The curves given below are that of position(x), velocity(v) & acceleration(a) vs time. What can we infer about the value of angular frequency ‘f’ from the given curves? 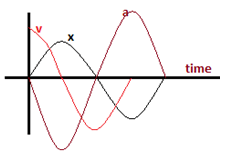