1. Which of the following can be used to describe how fast an object is moving along with the direction of motion at a given instant of time?
a) Instantaneous velocity
b) Instantaneous speed
c) Average velocity
d) Average speed
View Answer

Answer: a
Explanation: Instantaneous velocity describes the velocity of an object at a given time instant. Average speed is the speed at which the object travels throughout the time period and not an instant. Speed is a scalar quantity; hence it cannot show the direction of motion.

Answer: a
Explanation: The correct formula is v = dx/dt. Instantaneous velocity is the velocity of the object at a given time instant. v = x/t is the formula for average velocity.

Answer: c
Explanation: When the ball rises up, there will be a point where it will be in the state of instantaneous rest. At the this position the speed of the ball will be 0. Speed is maximum at the initial and final points.

5. A car is moving in a spiral starting from the origin with uniform angular velocity. What can be said about the instantaneous velocity?
a) It increases with time
b) It decreases with time
c) It remains constant
d) It does not depend on time
View Answer

6. What happen to the instantaneous velocity in a non-uniformly accelerated motion?
a) It increases
b) It decreases
c) It varies as the acceleration
d) It remains constant
View Answer

7. What is the velocity for a body following the graph below at 10s? 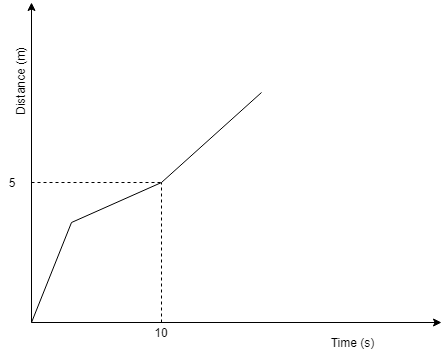