This set of Physics MCQs for Class 11 focuses on “Fluids Mechanical Properties Pressure – 2”.

1. A nail is made pointed at its end to ensure that pressure is more for a given amount of force applied on it. True or False?
a) True
b) False
View Answer

Answer: a
Explanation: Pressure is defined as force per unit area. And we need more pressure to drive the nail easily into the wall. So we make the nail pointed as it has a much lesser area than a blunt end.

3. Which of the following quantities has the same S.I. unit as that of pressure?
a) Work
b) Energy / Velocity
c) Energy / Displacement
d) mass X (velocity)2/Volume
View Answer

4. Pressure is a vector quantity. True or False?
a) True
b) False
View Answer

Answer: b
Explanation: When we talk about pressure at a point, we say it is exerted in all directions at that point, so it is not a vector quantity. As a vector quantity should have fixed direction with magnitude.

6. What is the pressure at points A, B, C & D marked in the given mercury barometer? Assume that you have used a tube of length greater than 76cm and then filled it completely with mercury and then inverted into a jar. Let P0 be atmospheric pressure, g be acceleration due to gravity and ρ be the density of mercury. 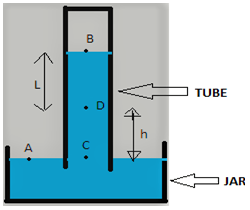 Answer: d
Explanation: The assumption given in the question is to ensure that when the tub is inverted into the jar, the pressure on the top of the tube stays zero, in other words, vacuum gets created.
Point A is exposed to atmosphere, so PA = P0.
Point B is the top layer exposed to vacuum so PB = 0.
Point C is on the same level as that of A, and the fluid is stationary, so PC = PA = P0. Point D is at a depth L below point B so PD = 0 + ρgL.
∴ the correct option is PA = P0, PB = 0, PC = P0, PD = ρgL.
Also note that we can write PD as P0 – ρgh and PC as ρg(L+h).

Answer: c
Explanation: When the car is moving with constant velocity, points on the same horizontal level will have the same pressure.
So, PA – PB = 0.
When the car moves with constant acceleration the pressure difference between those two points will be ρaL,
as the pressure difference will be responsible for providing acceleration to the small fluid column of volume L*dA between points A & B
(where dA is an area of small element that we think of).

To practice Physics MCQs for Class 11, here is complete set of 1000+ Multiple Choice Questions and Answers.