This set of Thermodynamics Questions & Answers for entrance exams focuses on “Availability or Energy Balance”.

2. The maximum work or exergy cannot be negative.
a) true
b) false
View Answer

Answer: a
Explanation: This is because any change in state of the closed system to the dead state can be accomplished with zero work.

Answer: b
Explanation: Exergy is destroyed due to irreversibilities.
Sanfoundry Certification Contest of the Month is Live. 100+ Subjects. Participate Now!
advertisement
advertisement

Answer: d
Explanation: The potential to develop work which was originally present is completely wasted in such a spontaneous process.

5. The difference in exergy entering a system and that leaving out is the exergy which is destroyed.
a) true
b) false
View Answer

Answer: a
Explanation: This is because exergy is not conserved.
Check this: Chemical Engineering MCQs | Thermodynamics Books

6. The exergy of an isolated system can ____
a) increase
b) decrease
c) never increase
d) never decrease
View Answer

Answer: c
Explanation: It is the counterpart of the entropy principle which states that the entropy of an isolated system can never decrease.

7. Since irreversibility > 0, the only processes allowed by the second law are those for which the exergy of the isolated system
a) increases
b) decreases
c) remains constant
d) none of the mentioned
View Answer

Answer: b
Explanation: The above statement also means that the exergy of an isolated system can never increase.
advertisement

Answer: c
Explanation: These are the two ways in which exergy transfer can take place.

9. For an isolated system, the exergy balance gives
a) ΔA=-I
b) ΔA=I
c) ΔA=0
d) none of the mentioned
View Answer

Answer: c
Explanation: Both first and second laws are used to balance exergy.

11. Evaluate the steady state exergy flux due to a heat transfer of 250 W through a wall with 400 K on one side and 600 K on the other side. Also find the exergy destruction in the wall. 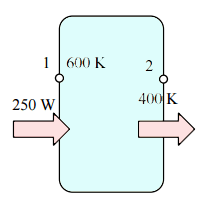 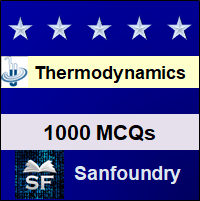