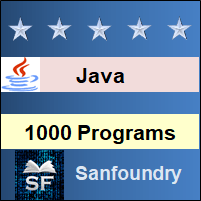 Java Applet Programs are browser-based programs that run in a Java-enabled browser. Applet programs are usually small and simple, yet they can be complex and sophisticated. Applets can be used to create games, simulations, and other interactive applications. Most applets are coded in the Java language and use the Java Virtual Machine to run. However, some applets are written in other languages such as JavaScript or ActionScript. Java applets are safe to run because they are sandboxed, which means they cannot access other resources on your computer without your permission.

What is Applet in Java?
A small application written in Java programming language is embedded into a web page known as applet. For example, applets can be used to provide a level of interactivity that is not possible with simple HTML pages. Applets can also be used to create highly customized user interfaces. The applet is hosted on a web server and works on the client-side. Local applet and remote applet are the two types of applets.

What is the best way to operate Applet in Java?

There are two standard ways to run an applet in Java:

Here’s a list of Applet programming in Java. Each example program includes a program description, Java code, and program output. All examples have been compiled and tested on Windows and Linux systems.

Here is the listing of Java Applet Programs: