1. Given a Wheatstone-bridge with external voltage V, Resistance Bridge with resistances P, Q, R, S, and galvanometer G. What is the balancing condition of bridge? 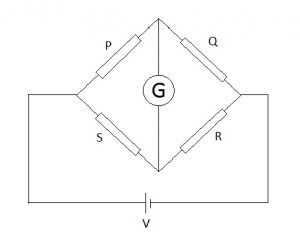 Answer: a
Explanation: A Wheatstone bridge is said to be balanced when galvanometer shows null deflection that is zero current flow through that path.
advertisement

Answer: a
Explanation: Wheatstone bridge was invented by Samuel Hunter in 1833, but it was improved and popularized by Charles Wheatstone in 1843.

3. In a Wheatstone bridge, which of the following is used as a null detector?
a) Ammeter
b) Galvanometer
c) Voltmeter
d) Wattmeter
View Answer

Answer: b
Explanation: Null detector is used to indicate zero current flow, and the device used is galvanometer.

4. Which of the following can be measured using a Wheatstone bridge?
a) Resistance only
b) Capacitance only
c) Inductance only
d) Resistance, capacitance, inductance, impedance
View Answer

Answer: d
Explanation: Wheatstone bridge cannot be limited to measurement of a single quantity only, it can be used to measure resistance, capacitance, impedance, inductance etc. with some modifications.

Answer: a
Explanation: Wheatstone bridge is used for measuring resistance, which has a null detector circuit and external DC voltage.

8. Why 4 terminal resistors are used?
a) For protection
b) To overcome parasitic resistances
c) To increase current flow
d) None of the mentioned
View Answer

Answer: b
Explanation: Four terminals in resistance are used for overcoming parasitic resistances.

Answer: b
Explanation: Four terminals are, a pair of potential terminals and a pair of current terminals.
advertisement

Answer: c
Explanation: Both sensitivity of indicator and applied voltage affects the accuracy in bridge measurement. 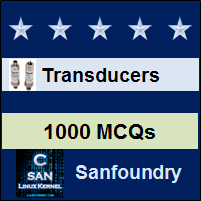