Answer: d
Explanation: Capacitance of a material is affected by area and distance of separation of plates and dielectric material.

Answer: b
Explanation: Strain to be measured is applied to parallel plates of a capacitor and total displacement change will be proportional to strain.

Answer: c
Explanation: Capacitance can be represented as C=ε0εrA / d
Where,
εr represents dielectric constant
A is the area of plate
d is the distance between plates.

Answer: a
Explanation: Dielectric constant of pure water is 80 which is much greater than other materials, this characteristic helps in measurement of moisture content.
Get Free Certificate of Merit in Instrumentation Transducers Now!

Answer: b
Explanation: Hygrometers are special devices, which are applicable for measuring the relative humidity of a medium.

7. Which of the following quantities cannot be measured by capacitive transducers?
a) Displacement
b) Speed
c) Moisture
d) None of the mentioned
View Answer

8. Which of the following have high relative permittivity?
a) Bakelite
b) Marble
c) Paraffin
d) All of the mentioned
View Answer

Answer: b
Explanation: Dielectric constant or relative permittivity of Bakelite is about 4.4, for marble, it vary from 8 to 10 and for paraffin it is only 2.2.

Answer: a
Explanation: In microphone electric signals are produced according to pressure variations caused by acoustic waves, which can be easily measured by displacement transducer.
advertisement

10. Thermometers are not possible using a capacitive transducer.
a) True
b) False
View Answer

Answer: b
Explanation: Capacitive transducers can be used to measure temperature in a way similar to moisture measurement. 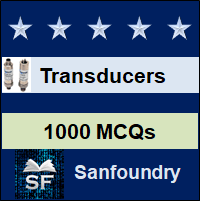