1. The midbrain is also called as __________
a) Medulla
b) Diencephalon
c) Mesencephalon
d) Hypothalamus
View Answer

Answer: c
Explanation: Mesencephalon is known as midbrain, it is a part of brain stem. It is associated with vision, hearing, motor control, temperature regulation and arousal.
advertisement

Answer: b
Explanation: Midbrain is made up of 2 parts. They are optic lobes and cerebral peduncles.

Answer: d
Explanation: Optic lobes are present on dorsal side. 1 pair of an optic lobe is present. Each divided transversely into upper and larger superior coliculus and lower and smaller inferior colicus.

5. The optic lobes in human are represented by the corpora ___________
a) Bigemina
b) Arenacea
c) Striata
d) Quadrigemina
View Answer

Answer: a
Explanation: Ventricles are filled with cerebrospinal fluid. It protects the brain from injury and transport nutrients and waste. The third ventricle is a narrow cavity that is located between the two halves of the brain.

7. Which foramen is paired in mammalian brain?
a) Foramen of Luschka
b) Foramen of Monro
c) Foramen of Magendie
d) Inter ventricular foramen
View Answer

Answer: a
Explanation: Foramen of Luschka is two of the foramen in ventricular system and link the fourth ventricle to the cerebellopontine cistern.

8. Which of the following is the reduced part of the brain?
a) Fore brain
b) Mid brain
c) Hind brain
d) Cerebral cortex
View Answer

Answer: b
Explanation: Mid brain is a reduced part of the brain. It is composed of tectum and tegmentum.

Answer: d
Explanation: The skull is composed of 2 part.: The cranium and the mandible. Brain is situated in cranium and it protects the brain.
advertisement

To practice all areas of Human Anatomy and Physiology, here is complete set of 1000+ Multiple Choice Questions and Answers. 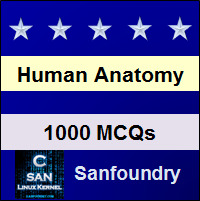