This set of VHDL Multiple Choice Questions & Answers (MCQs) focuses on “Flattening and Factoring of Functions”.

Answer: c
Explanation: Flattening is a process of converting the unoptimized Boolean description into a PLA format. PLA format is a format in which the description is converted into sum of products form i.e. in the form of OR and AND arrays.
advertisement

Answer: b
Explanation: Flattening is named so because it creates a flat signal representation of only two levels: an AND level and an OR level. Because it converts the function into PLA form in which we can implement only sum of products.

3. How will you flatten the following function?

Answer: a
Explanation: Flattening means only two levels which are AND and OR arrays. So, there must be no intermediate levels. For example, in the question given above, b and c are two intermediate signals used. So, first b and c must be solved then only a can be solved. Therefore, flattening will give the resultant shown in option a. It is Boolean equivalent of the first without any intermediate node.
advertisement

Answer: b
Explanation: Flattening of functions increase the speed of functions. Since there are no intermediate nodes, there are few logic levels from the input to the output. It is only good for smaller functions in which numbers of terms are not more.

Answer: a
Explanation: In case, when a function has many numbers of terms, especially with XOR functions. Because a n- input EXOR gate needs 2^(n-1) terms. Due to which it becomes much complicated to convert that particular function into flattened PLA form. Due to this reason the speed decreases.
advertisement

6. Which of the following is the opposite of flattening of functions?
a) Structure
b) Adding intermediate nodes
c) Un-flattening
d) Factoring
View Answer

Answer: d
Explanation: Factoring is the process of adding intermediate terms or nodes to add structure to a description. So, factoring is exactly opposite of flattening in which the intermediate nodes are removed and made a single PLA function.

7. The main advantage of using factoring is ________
a) Reducing the speed
b) Reducing the number of terms
c) Adding intermediate nodes
d) Reducing flattening
View Answer

8. What is another name for the factoring of functions?
a) De-flattening
b) Intermediation
c) Structuring
d) De-structuring
View Answer

Answer: c
Explanation: Factoring is also known as structuring. This is the name given to factoring because it structures the expressions and increases their readability. It basically uses the concept of factoring used in mathematics to do so.

9. Which factor can be there in the following two functions?

Answer: d
Explanation: After factoring, using various Boolean properties, the term b or c can be factored out to a separate intermediate node. In the first expression, if we see it is equivalent to a AND (b or c). Also, b OR c is a part of second expression as well. 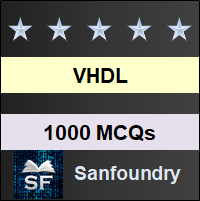