Answer: b
Explanation: An alias declaration is used for an alternative name for an existing object. An object is any signal, variable or constant. Thus, an alias creates a duplicate or xerox of the existing object but doesn’t create a new object.
advertisement

Answer: d
Explanation: To declare an alias, the keyword ALIAS is used. Then, the colon sign followed by the name of ALIAS. Then, the name of the object is then specified whose alias is to be created. So, that the duplicate for that object can be created.

3. For what purpose in the following, one can use alias?
a) To divide the complex part into smaller slices
b) To decrease the simulation time
c) To make use of same memory
d) To assign different memory locations
View Answer

Answer: a
Explanation: In the complex designs, for example, in the design of CPU, one may need to divide the complex part I to smaller reference slices which are easy to maintain and it also increases the readability of the code.

4. Which of the following can’t be aliased?
a) Signal
b) Loop variable
c) Variable
d) File
View Answer

Answer: b
Explanation: All the objects from the VHDL can be aliased i.e. signals, variables, constants. Even all the non-objects can also be aliased except Labels, Loop parameters and Generate parameters. These are the only three exceptions.

5. An alias of array type can reverse the order of the array.
a) True
b) False
View Answer

Answer: a
Explanation: It is possible to reverse the order of an array in its alias created. For example, if an array is defined with the range 0 TO 7, then its alias can also define 7 DOWNTO 0. It will be completely legal in VHDL.
advertisement

6. In what way the qualified expression differs from a normal expression?
a) It has a keyword qualified in front of it
b) Its type is explicitly defined
c) Its range is defined
d) It is similar to simple expression but is synthesizable
View Answer

Answer: b
Explanation: Qualified expression is an expression whose type is being explicitly specified in the expression itself. In some cases, it is necessary to specify the type other it may be ambiguous to interpret the expression.

Answer: c
Explanation: To define a qualified expression, first we need to specify the type which is followed by a single quotation mark. After specifying the type, then the expression is written.

Answer: b
Explanation: In case of function overloading, where in one function the parameter is of bit_vector type and other is of std_logic_vector type, then it could be difficult to identify that which function is being called. Say, 0110 is the argument passed to function, one can’t identify its type by seeing. So, qualified expression must be used.
advertisement

10. A qualified expression is synthesizable in VHDL.
a) True
b) False
View Answer 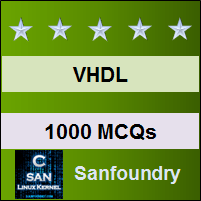