This set of Mathematics Problems for Class 9 focuses on “Some More Criteria for Congruence of Triangles”.

Answer: b
Explanation: As we can see that AB = PQ, BC = QR and CA = RP, according to SSS rule (Theorem 7.4), ΔABC and PQR are congruent and hence angles of ΔABC are equal to corresponding angles of ΔPQR.
Therefore, ∠A = ∠P, ∠B = Q, ∠C = ∠R.

2. From the diagram given below, we can say that ΔABC and ΔPQR are congruent.

Answer: a
Explanation: We can see in the diagram that AB = PQ, ∠ABC = ∠PQR (Right angles) and BC = PR. Therefore, according to RHS rule (Theorem 7.5), ΔABC and ΔPQR are congruent.

3. From the diagram given below, what is the true relation between ∠ABC and ∠ABD? 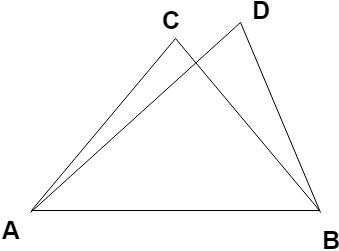 Answer: c
Explanation: We can see in the diagram that AD > AC and the angles opposite to sides AD and AC are ∠ABD and ∠ABC respectively.
Therefore, according to theorem 7.6, angle opposite to the longer side is larger.
Hence, ∠ABC < ∠ABD.

4. From the diagram given below, what is the true relation between three sides of the triangle? 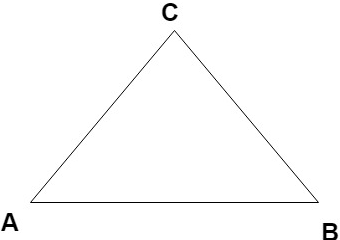 Answer: d
Explanation: According to theorem 7.8, sum of any two sides of a triangle is greater than third side.
Hence, AB + BC > AC is correct.

5. From the diagram given below, which of the following option is true? 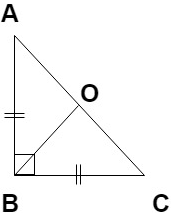 Answer: a
Explanation: We can see in the diagram that AB = BC (given),
OB = OB (same side) and AO = OC (BO is bisector of the side AC).
Therefore, according to SSS rule, ΔOBA and ΔOBC are congruent.

To practice Mathematics Problems for Class 9, here is complete set of 1000+ Multiple Choice Questions and Answers.