This set of Mathematics Multiple Choice Questions & Answers (MCQs) focuses on “Angle Subtended by a Chord at a Point”. 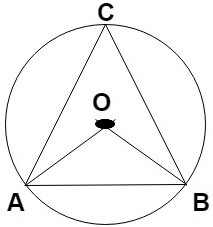 Answer: b
Explanation: We can see from the diagram that “O” is the centre of the circle, therefore angle formed by the chord at the centre is ∠AOB.

2. From the diagram given below, if lengths of the chords AB and PQ are equal, then ∠AOB = ∠POQ. 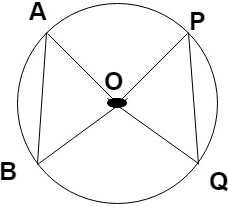 Answer: a
Explanation: According to the theorem 10.1, equal chords of a circle subtend equal angles at the centre.
Here, it is given that AB = PQ.
Hence, ∠AOB = ∠POQ.

3. From the diagram given below, if O is the centre of the circle and OL is perpendicular to chord AB, then which of the following is true? 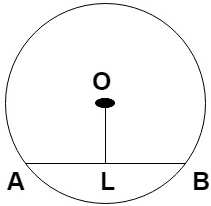 Answer: d
Explanation: According to theorem 10.2, perpendicular from the centre of a circle to a chord bisects the chord.
Therefore, AL = LB.