This set of Physics Multiple Choice Questions for Schools focuses on “Dipole in a Uniform External Field”. 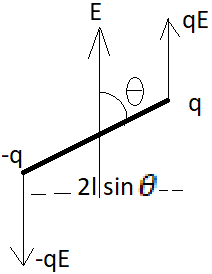 Forces on +q and –q charges act along two opposite direction and the perpendicular distance between the two forces is equal to 2lsinθ (as the distance between the two point charges is 2l). Therefore the torque = force*distance=qE*2lsinθ=(q*2l)*E*sinθ. But q*2l is defined as the dipole moment \(\vec{p}\) of the dipole. So the expression of torque becomes \(\vec{p} \times \vec{E}\) according to cross product rule.

2. If an electric dipole is placed in a uniform electric field ______ will act on the dipole.
a) A force but no torque
b) Both force and torque
c) Torque but no force
d) No torque or force
View Answer

We know, the torque acting on a dipole of moment p and placed in a field E is equal to \(\vec{p} \times \vec{E}\) which can also be written as p*E*sinθ following the cross product rule. In this case, the field is parallel to the axis of the dipole. Therefore θ=0 and sinθ is also equal to 0. Hence, the torque acting on the dipole will be the minimum i.e. 0. The torque will be maximum if θ=90 degree and so sinθ becomes 1 in that case.

4. If an electric dipole is placed in a non-uniform electric field ______ will act on the dipole.
a) A force but no torque
b) Both force and torque
c) Torque but no force
d) No torque or force
View Answer

Answer: a
Explanation: Torque acting on a dipole is p*E*sinθ where E is the electric field. Now θ is 0 degree, so sinθ becomes 0 and hence no torque acts on the dipole. So in this case, no force or torque acts on the dipole. Therefore it will be the condition of stable equilibrium. In the case of θ=180 degree, sinθ is also 0 but the condition is known as unstable equilibrium i.e. if we rotate the dipole a bit, it will not come back to its initial position.