1. The attraction is the real proof of an object being charged.
a) True
b) False
View Answer

3. Why is gold used in the Gold-leaf electroscope?
a) Gold is easily available in nature
b) Gold is malleable
c) Gold is conducting in nature
d) Gold is cheap
View Answer

Answer: b
Explanation: Though gold is a costly metal it is used in electroscope because of the property malleability. This means very thin and light sheets can be formed from gold simply by hammering or rolling and hence the deflection of the light gold plates increases.

4. What happens to the plates of the apparatus if we measure alternating charge using a Gold-leaf oscilloscope?
a) It doesn’t diverge at all
b) It diverges momentarily
c) The plates give a proper divergence
d) The degree of divergence increases and decreases repeatedly
View Answer

5. Which one of the following is the correct diagram of charge distribution in a hollow sphere?
a) 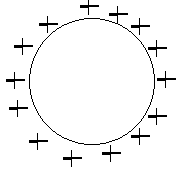 Answer: b
Explanation: The human body is a good conductor and hence the charge produced by friction flew through his body to the ground. We can tackle the problem simply by holding the brass rod with the help of some insulated holder.

8. When a glass rod is rubbed with silk, what kind of charge will be developed on glass?
a) 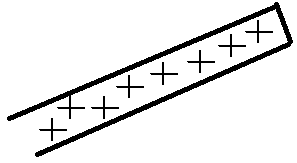 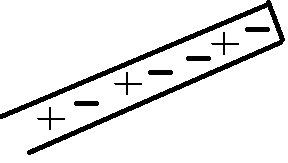 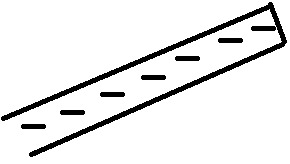 Answer: a
Explanation: According to electrostatic series, glass is situated above silk. So, if the glass is rubbed with silk, the positive charge on glass and negative charge on silk is produced. Similarly, we can predict what is the nature of charge if we rub two di-electric substances together.

Answer: d
Explanation: The two spheres are oppositely charged by the same amount. So if they come in contact, both of their charges are neutralized. So they become uncharged and don’t attract or repel each other.

» Next - Physics Questions and Answers – Conductors and Insulators
Next Steps: