Answer: a
Explanation: Conductors have lots of free electrons that can carry electricity if the potential difference is applied across them. Protons are positively charged particle and Neutron are electrically neutral. They don’t carry electricity in conductors.

Answer: b
Explanation: Glass, paper, and cotton are good quality insulators. The rest options contain one or more conducting materials. Silver is the best conductor material available in nature. But it is costly, so it can’t be used in the electricity distribution system.

Answer: a
Explanation: The more the band gap between the valence band and conduction band, the worse is the conductivity of the material. For conductors, there are overlapping bands. So, conductors can carry electricity. But there is a huge energy gap in the case of insulators. So, they don’t carry electricity at all.

4. A static electricity experiment can be performed properly in any season. The statement is ______
a) True
b) False
View Answer

Answer: b
Explanation: In the rainy season, the air becomes humid. Humid air is a good conductor compared to dry air and so they carry the static charges of a body. So, a body cannot hold its charge for long in humid season.

5. The rubber used in the wheels of aero-plane is _________
a) Perfect insulator
b) Slightly conducting
c) Can be an insulator or conducting
d) Semiconductor
View Answer

Answer: b
Explanation: Due to high friction during takeoff, a huge amount of charge is produced on the rubber of the wheel of a plane. This charge must be sent to the ground. So, the rubber used is slightly conducting, else the huge charge produced may produce a spark and can cause an accident.

6. According to band theory, what are the true nature of the valence band and conduction band in conductors?
a) 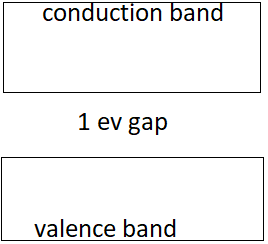 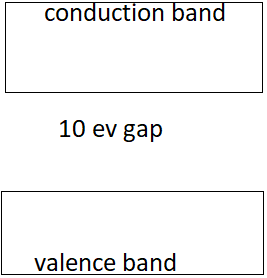 7. Insulation breakdown may occur at _______
a) High temperature
b) Low temperature
c) At any temperature
d) Depends on pressure
View Answer

Answer: a
Explanation: At high temperatures, electrons of insulators get excited and then the electrons can overcome the large energy band gaps between valence and conduction bands. So a large number of electrons travel to the conduction band and they act as conductor i.e. insulation breakdown occurs.

Answer: a
Explanation: Semiconductors are those which carry current with almost zero resistivity at a very low temperature (example: Lead at -272-degree centigrade). So, they have a very huge amount of current flow through them.