1. For a metal which is prone to hot shortness like aluminium and copper, the extrusion speed has to be _______
a) high
b) low
c) moderate
d) doesn’t matter
View Answer

Answer: b
Explanation: In the case of metal which is prone to hot shortness, the ram speed should be deficient as few mm per sec. This because the high ram speed creates more heat that itself can lead to hot shortness.

Answer: a
Explanation: Decreasing the die angle increases the homogeneity of deformation, hence more uniform the microstructure and lower the extrusion pressure, but the friction between the die wall and the billet is the limitation to which the angle can be increased.

3. The plot between the extrusion pressure vs. the ram travel is plotted. Find the correct combination of direct and indirect extrusion process relationship? 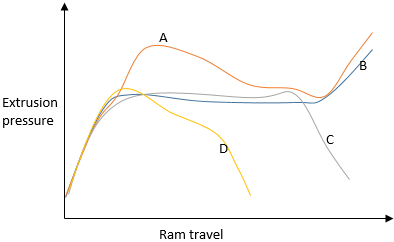 7. The following schematic diagram shows the metal inside the extrusion chamber. Identify the dead zone. 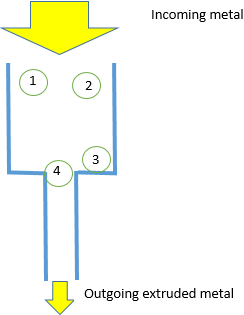 Answer: c
Explanation: The dead zone is defined as the region in the die where if the metal is present, it will never undergo deformation because of its location. In this diagram, the position 3 is in the extreme corner, hence the metal at this place undergoes least deformation.

8. The Ugine-Sejournet process is associated with which of the following metal working process?
a) Forging
b) Rolling
c) Extrusion
d) Sheet metal forming
View Answer

Answer: c
Explanation: The Ugine-Sejournet process is related to extrusion in which molten glass is used as the lubricant and the twisted metal are generally nickel-based alloys.

9. In which of the following process, the friction between the billet and the die wall is minimum?
a) Direct extrusion
b) Impact extrusion
c) Hydrostatic extrusion
d) Tube drawing
View Answer

Answer: c
Explanation: In the hydrostatic extrusion, the pressurized fluid is used as the lubricant as well as the medium of force transmission. So, the friction between the wall and billet is negligible.