This set of Mechanical Metallurgy MCQs focuses on “Griffith Theory of Brittle Fracture – 2”.

Answer: a
Explanation: Cottrell gave the equation for microcrack nucleation. Its physical significance is that a crack will form when the work done by the applied shear stress in producing the displacement nb is equal to work done in moving the dislocation against the friction stress and additionally the work in producing the new fracture surface.

2. Which of the following force is responsible for forcing dislocation together during cracking?
a) Tensile force
b) Shear force
c) Bending force
d) Torsional force
View Answer

Answer: b
Explanation: The shear force is responsible for piling the dislocation together in micro-cracking, but the tensile strength is required to make crack propagation.

3. The grain size has an effect on the ductile or brittle failure of material.
a) True
b) False
View Answer

Answer: a
Explanation: The micro-cracks propagation in any material is strongly influenced by the barrier such as grain boundary. So, the smaller the grain size, higher will be the fracture strength.

5. The ductile to brittle transition does not depend on the metallurgical feature. It is material-specific property.
a) True
b) False
View Answer

Answer: b
Explanation: The limiting equation for transformation suggested by Cottrell is (τiD1/2+k’)k’ > Gϒsβ;
Here the factor k’ is dependent on both the material and metallurgical properties.

Get Free Certificate of Merit in Mechanical Metallurgy Now!

6. As the grain size decreases, the ductile to brittle transition temperature _________
a) increases
b) decreases
c) remains the same
d) no defined relationship between them
View Answer

7. If the surface energy is high then _____________ is not likely to happen.
a) brittle fracture
b) ductile fracture
c) fatigue fracture
d) pure shear fracture
View Answer

Answer: a
Explanation: Ductile fracture occurs by gross plastic deformation before fracturing. So the cross-section area is reduced by the process of necking which eventually leads to fracture of the material.

Answer: a
Explanation: The ductile fails by necking of specimen and in some extreme material this necking leads to point down up to single line/point, and this is called rupture.

Answer: b
Explanation: The ductile failure necking starts at ultimate tensile strength point in the engineering stress-strain curve. This is the point where the increased strain hardening fails to compensate for the decrease in cross-sectional area, so the curve shifts downwards.

To practice MCQs on all areas of Mechanical Metallurgy, here is complete set of 1000+ Multiple Choice Questions and Answers. 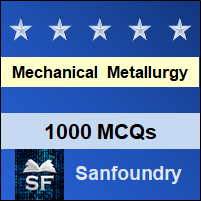