2. The creep test and the stress-rupture test are the same things representing the same type of curve at equal stresses.
a) True
b) False
View Answer

Answer: b
Explanation: The stress rupture test is different from the creep test. The objective of the creep test is to determine the creep rate of the material, so usually, low stress is applied and strain is limited to 0.5. While in the stress-rupture trial, the material is tested till the breaking point and the applied load and stresses are also very high.

3. Which curve in the following graph is correctly showing the relationship between the stress and rupture time of the material? 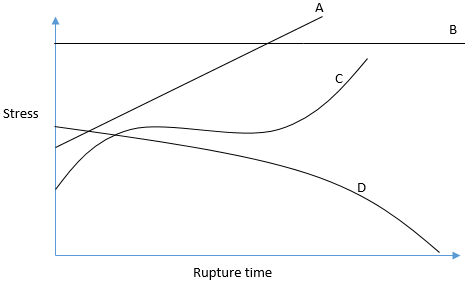 Answer: d
Explanation: As the stress increases on the material, they tend to experience much higher forces on their bonds, and the rupture time will decrease. The curve D represents the reduction in the required stress with increasing time or vice versa.

4. The change in the slope of stress-rupture line is not due to _____________
a) metallurgical change
b) necking of the material
c) oxidation
d) recrystallization
View Answer

Answer: b
Explanation: The change in the slope of log-log stress rupture curve in an indication of sudden change in the value of required stress to cause the rupture of the material. So, it is always associated with metallurgical, internal phenomena of the material. The necking is physical change, so not included in the list.

5. The following graph represents the relation between the creep rate and the total strain: 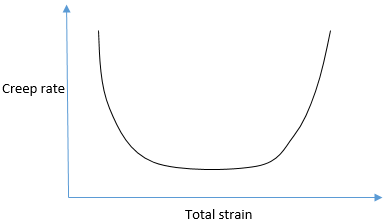 Answer: a
Explanation: The creep rate is defined at the change in length/strain with time. So in the primary state, the creep is high but decreasing then in the secondary state it becomes constant, and finally, it increases again till fracture.

6. The large-grained aluminum is most suitable for creep related study.
a) True
b) False
View Answer

Answer: a
Explanation: The aluminum forms a thin protective oxide layer on its surface, so it eliminates the possibility of oxidation of sample at high temperature.

8. The slip band produced at higher temperature are _______ and ________ spaced than for a room temperature deformation.
a) fine, widely
b) fine, narrow
c) coarse, widely
d) coarse, narrow
View Answer

9. The formation of sub-grain structure inside the lattice is a phenomena observed in the high-temperature creep. The number of new sub-grain formed are highest in which stage of creep?
a) Primary
b) Secondary
c) Tertiary
d) Equal in all phase
View Answer

Answer: a
Explanation: Most of the subgrain formation takes place in the primary stage only. With increasing time, the material enters the secondary stage and subgrain only grow, by keeping the number of subgrains almost constant.