1. The elastic strain energy is equal to the area under the stress-strain curve up (from origin to the elastic limit).
a) True
b) False
View Answer

Answer: d
Explanation: Elastic strain energy per unit volume is obtained by dividing total elastic energy with overall volume. Its unit is N/m2; where N-newton, m-meter. Match the unit of all the expression. Only this expression \(\frac{1}{2}(p \Delta)\) has unit N/m2.

3. In the universal testing machine for tension test, the output raw data are in the form of ________
a) Load vs. Elongation
b) Engineering stress vs. Engineering Strain
c) True Stress vs. True strain
d) Torque vs. Angle
View Answer

Answer: a
Explanation: The force/load and the corresponding change in length of the specimen are the two parameters which can be controlled in UTM. In particular, Stress is tough to control in UTM because the area of the sample continuously decreases with elongation. Torque vs angle data is obtained in the torsion test. 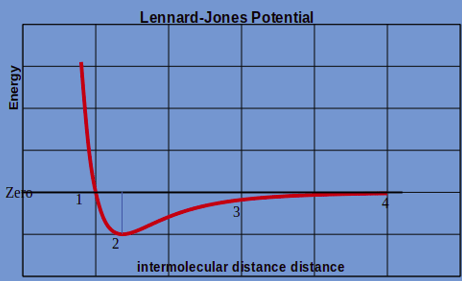 Answer: b
Explanation: The Equilibrium interatomic distance is the point where the potential energy of the system is minimum. In the diagram it is clearly observed that the point 2 has minimum energy.

5. In the following Potential energy vs. interatomic distance chart, interatomic force between the atoms will be zero at point __________ 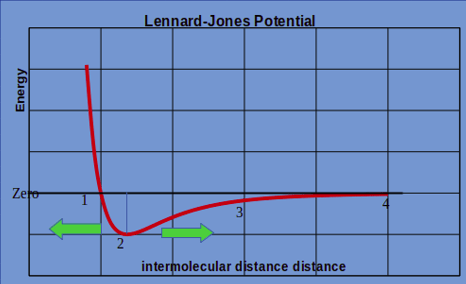 Answer: b
Explanation: The interatomic force will be zero at a position where there is no net attraction or repulsion between atoms. In the mathematical term, the is the point where the change in energy with distance is zero. (Slope of the above curve is 0).

Answer: b
Explanation: Physically, it can be interpreted as when the interatomic distance between 2 atoms reduces, their electron clouds starts overlapping. It causes very high repulsion between two atoms. As the distance increases from equilibrium atomic position, the Van der Waals attraction tries to bring the 2 atoms together and the nature of force will become attractive.

7. Elastic constant of crystal does not vary with the orientation of the crystal.
a) True
b) False
View Answer

9. The variation of interatomic energy with atomic distance is given by the following equation V(r)=4ε[(σ/r12)−(σ/r6)] Where V(r) is the potential energy, and r is interatomic distance. ε and σ are constant.
Find the value of energy at the point where the interatomic force is zero?
a) – ε
b) ε
c) 0
d) σ
View Answer

10. The elastic constant of a material is determined by the ________________ of potential energy vs interatomic distance curve.
a) slope
b) curvature
c) x-intercept
d) minimum
View Answer

Answer: b
Explanation: In an elastic solid bond energy is a continuous function of the displacement (from the mean position of interatomic distance) thus:
Φ(u) = Φo+(∂Φ/∂u)o u+1/2((∂Φ/∂u)o2 u2+ ………….
Where Φ(u) is total potential energy, u is the displacement and Φo is equilibrium potential energy when u=0.
So, the first differentiation of energy will give force at equilibrium (∂Φ/∂u)o=0.
Hence the final expression will be
=> P= (∂Φ/∂u)o2 u, where P= ∂Φ(u)/∂u
This is equivalent to the raw form of Hooke’s law, and the elastic constant will be equal to (∂Φ/∂u)o2, i.e. curvature of the curve.

11. Which of the following factors change the value of the elastic constant of any material?
a) Heat treatment
b) Vacancy
c) Temperature
d) Dislocation
View Answer