This set of Mechanical Metallurgy Questions and Answers for Campus interviews focuses on “Fatigue of Metals – S-N Curve – 2”.

Answer: c
Explanation: The S-N curve is the plot between the number of stress cycle and the mean stress required to fail the component at the given number of cycles. It is the most basic and useful diagram for fatigue calculation.

2. The S-N curve is the plot between the Stress and the number of cycle to failure and both are plotted in the log-log scale.
a) True
b) False
View Answer

3. In the given S-N curve, which of the following is showing endurance limit?

Answer: b
Explanation: The endurance limit states that after the specified number of cycles, the material can sustain the infinite number of load reversing cycle without failure of the component. So in the case of the green line, the required stress value becomes constant after a certain point.

Answer: c
Explanation: There is no fine line between low cycle and high cycle fatigue, but typically less than 105 cycles. If components fail, it is kept in the category of low cycle fatigue.

5. Which of the following material does not show endurance limit?
a) Mild Steel
b) Cast iron
c) Titanium
d) Aluminum
View Answer

6. The high cycle fatigue is described by the Basquin equation.
a) True
b) False
View Answer

Answer: a
Explanation: The high cycle fatigue is defined by Basquin equation, which states that:
-> Nσap= C; where N is the number of cycles, σa is stress amplitude, and p, C are empirical constants.

8. Among the given mechanical test, the highest number of samples are required in __________
a) tensile test
b) torsion test
c) fatigue test for S-N curve
d) fatigue test for probabilistic analysis
View Answer

Answer: d
Explanation: The statistical analysis of fatigue sample requires the highest number of example because S-N curve can be determined by taking few samples in the range of cycle and failing them, but the probabilistic analysis needed a large number of sample to predict the chances of failure at the given stress value.

9. In the given S-N cycle, there are four different samples tested for different stress values. Among given sample, the highest probability of the failure is for __________ sample. 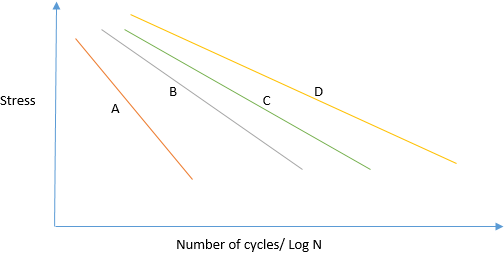 10. The scatter between the fatigue life data for different samples ____________ with increase in the stress value.
a) increases
b) decreases
c) remains constant
d) no relation
View Answer

Answer: b
Explanation: As the stress values increase in the sample, the probabilities calculation for failure becomes more accurate. Or in other word, it becomes much easier to predict the failure of the sample. Hence, the scatter in the fatigue data reduces.

To practice all areas of Mechanical Metallurgy for Campus Interviews, here is complete set of 1000+ Multiple Choice Questions and Answers.