Answer: a
Explanation: Twins can form in very short time of few microseconds, while slip takes time in order of several milliseconds before a slip band is formed. Under certain conditions, the formation of twins is audiable as a click or loud report known as the tin cry.

2. Twinning is not associated with specific crystallographic direction; it only depends on the direction of mechanical force. There is no preferred orientation of twinning in crystal.
a) True
b) False
View Answer

Answer: b
Explanation: Twinning occurs in a definite direction on a specific crystallographic plane for each crystal structure.

Answer: b
Explanation: Twinning is not a dominant deformation mechanism in metals which possess many possible slip systems. Twinning generally occurs when the slip systems are restricted or when something increases the critical resolved shear stress so that the twinning stress is lower than the stress for the slip.

5. The stacking sequence of the atomic arrangement for FCC is ___________
a) ABCABCABC
b) ABABABABA
c) AABBAABBAA
d) AAAAAAAAA
View Answer

Answer: a
Explanation: The sequence of stacking in FCC is like layer A then Layer B then layer C;
Following diagram show the pattern of stacking- 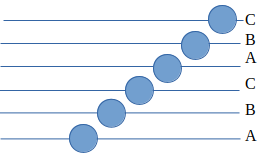 6. The stacking sequence of the atomic arrangement for HCP is ___________
a) ABCABCABC
b) ABABABABA
c) AABBAABBAA
d) AAAAAAAAA
View Answer

Answer: b
Explanation: The sequence of stacking in HCP is like layer A then Layer B then layer A;
Following diagram show the pattern of stacking- 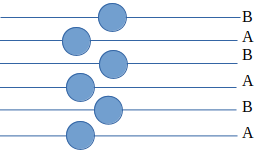 Answer: a
Explanation: The stacking sequence of the FCC is ABCABCABC. But the introduction of stacking fault in FCC causes shift of plane from ABC|BCABC, here plane A is missing. So the region will become BCBC, this is equivalent to HCP stacking sequence.

8. Which of the following represents the extrinsic stacking fault in the FCC Metal?
a) ABCABCABC
b) ABCBCABC
c) ABCACBCABC
d) ABABABABA
View Answer

Answer: c
Explanation: The extrinsic stacking fault is equivalent of inserting extra plane in the stacking sequence of FCC. In ABCA|C|BCABC, the plane C is extra, and it creates the twin region around the fault and also called twin stacking fault.