1. The following creep map is plotted with homologous stress and temperature, as shown in the region. The coble creep region is shown by region ________ 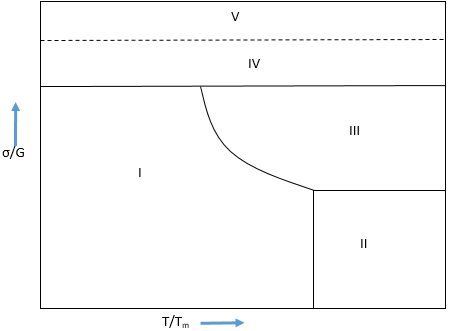 Answer: a
Explanation: The Coble creeps at the lower temperature and over a range of temperature, hence the region I indicate the right region for Coble creep.

2. The following creep map is plotted with homologous stress and temperature, as shown in the region. The Nabarro-Herring creep region is shown by region ________

3. The following creep map is plotted with homologous stress and temperature, as shown in the region.
The Dislocation glide region is shown by region ________

Answer: d
Explanation: The dislocation glide is pure mechanical deformation of the material; there is minimal diffusion associated with dislocation glide. Hence this region will have a very high-stress value and range in the entire temperature range.

Answer: b
Explanation: As the strain rate increases, the dislocation creep and Nabarro-Hearing region shrinks and the coble curve shifts towards right and span over the broader range in the creep map.

5. The steady-state creep activation energy is given by the Arrhenius type rate equation ε = Ae-(Q/RT), where,
Q = activation for rate-controlling step
A = pre-exponent complex constant containing the frequency of vibration of the flow unit
T = absolute temperature
R = Universal gas constant
The slope of the equation for log ε vs. log T plot will be equal to __________
a) Q/R
b) Q/2.3R
c) A/Q
d) A/2.3R
View Answer

Answer: c
Explanation: The extensive correlation of creep and diffusion data of pure metal shows that their activation energy for high-temperature creep is equal to the value of self-diffusion of atoms of the same metal in the crystal lattice.

8. The two necessary conditions for superplasticity is higher temperature and low strain rate of deformation.
a) True
b) False
View Answer

Answer: a
Explanation: The superplasticity is associated with high strain rate sensitivity of the material. This behavior is generally observed above 0.5Tm and at a very low strain rate.

9. The applied flow stress to cause the superplasticity of the material has to be ___________
a) very large
b) large
c) small
d) very small
View Answer

Answer: d
Explanation: Along with having the low strain rate, the flow stress is also very low to cause the superplasticity in the material. The elongation as high as 1000% can be achieved under this state.

10. The superplasticity is reduced by the presence of the second phase particle in the matrix.
a) True
b) False
View Answer

Answer: b
Explanation: Superplasticity is achieved by a very fine grain of order a few microns because it allows the relative movement between the grain without fracturing the material. The presence of the second phase particle restricts the grain growth at elevated temperature, hence improving the superplasticity behavior of the material.

Answer: c
Explanation: Superplastic material is equiaxle in nature and remains equiaxle even after deformation. This is because equiaxed grain provides the uniformity of structure and prevents the premature breaking of the sample.

To practice all exam questions on Mechanical Metallurgy, here is complete set of 1000+ Multiple Choice Questions and Answers.