2. The equicohesive temperature is defined as the temperature at which both the grain and grain boundary have the same strength.
a) True
b) False
View Answer

3. The equicohesive temperature is a material property and always fixed for a given material.
a) True
b) False
View Answer

Answer: b
Explanation: The larger grain material will have less grain boundary area, so the relative amount of sliding is less, hence grain boundary remains intact at the higher temperature. The inverse of this is also true.

Answer: c
Explanation: In case of dispersion strengthening, the other particles of the high melting point are added to the matrix mechanically. So, at high temperature also, the second phase remains rigid and offers the resistance to dislocation movement and creep of the material.

Answer: c
Explanation: The solid solution strengthening having high valance is most effective in improving the creep strength because the solid solution decreases the stacking fault energy of the material.

8. The Suzuki Interaction in the crystal lattice is defined as the interaction between _______
a) dislocations
b) solute atom and dislocation
c) stacking faults
d) grain boundary and solute atom
View Answer

Answer: c
Explanation: The interaction between the two stacking faults which strengthens the creep resistance of the material at high temperature is known as the Suzuki interaction.

9. Which of the following is not a high-temperature application precipitate?
a) VC
b) TiC
c) Cr23C6
d) Cu3Al
View Answer

Answer: c
Explanation: The Inconel is a commercially very important alloy having a very low coefficient of thermal expansion. It contains mainly Cr-15%, Ni- 75%, Fe-7%, and other minor alloying elements.

11. Which of the following is not a nickel-based high-temperature application alloy?
a) Astroloy
b) Inconel
c) Udimet
d) Vitallium
View Answer

12. The high-temperature alloys are fabricated by which of the following method?
a) Rolling
b) Forging
c) Precision casting
d) Extrusion
View Answer

Answer: c
Explanation: The high-temperature application is highly alloyed, constituting so many elements that to achieve uniform composition of all the element, high precision casting is a major method. Other methods include the powder metallurgy route.

Answer: c
Explanation: The log-log relationship between the tr and ε shows a straight line behaviour. So, according to this relationship, it is easier to extrapolate the data to large time or stress values.

15. The Larser-Miller parameter is used to predict the creep strength and the life of the component in long time by comparing the results obtained at elevated temperature in shorter time.
a) True
b) False
View Answer

Answer: a
Explanation: The creep test runs for years for sometimes for some materials. Hence predicting the material property becomes quite impossible in short time. So the same analysis is carried out at elevated temperature to get result in shorter time.

16. According to Larser-Miller parameter, the relation between the log of rupture time and the inverse of temperature is shown in which curve in the following figure? 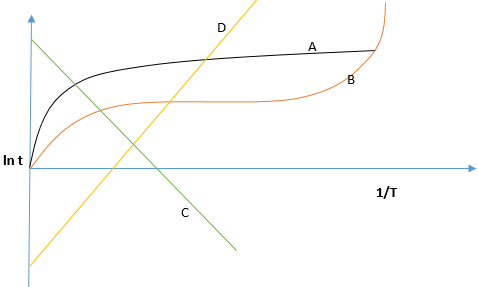 Answer: c
Explanation: According to the Laser-Miller parameter, the curve follows the path as:
-> T(ln t + C1) = P1
-> ln t + C1 = P1/T
So the relationship between the ln t and 1/T follows an inverse linear relationship. So, it will have straight line with decreasing slope.