1. Among the given metal, which has the highest stacking fault energy?
a) Aluminum
b) Copper
c) Brass
d) Stainless steel
View Answer

Answer: a
Explanation: The material with high stacking fault energy is not strain-hardenable material. So among all the given metals, aluminum is the not metal which is not strained hardened material.
advertisement

2. Inhomogeneous deformation of crystal results in regions of different orientation called deformation bands. Deformation bands have been observed in both fcc and bcc metals, but not in hcp metals.
a) True
b) False
View Answer

Answer: a
Explanation: Consideration of the equation for critical resolved shear stress shows that it will be difficult to deform a hexagonal crystal when the basal plane is nearly Parallel to the crystal axis. Orowan found that if a cadmium crystal of this orientation were loaded in compression, it would deform by a localized region of the crystal suddenly snapping into a tilted position with a sudden shortening of the crystal.

3. Which of the following is not a source of dislocation multiplication?
a) Condensation of the vacancy
b) Frank read mechanism
c) Emission from high angle grain boundary
d) Annealing
View Answer

Answer: d
Explanation: Dislocation multiplication can arise from condensation of vacancies, by regeneration under applied stress from existing dislocations by either the Frank-Read mechanism or multiple cross-slip mechanisms or by the emission of dislocations from a high-angle grain boundary. But the annealing generally reduces the dislocation density.

4. A zinc crystal is strained to point A, unloaded, and then reloaded in the direction opposite to the original slip direction:
What is the reason for the drop in shear stress when loaded in the opposite direction? 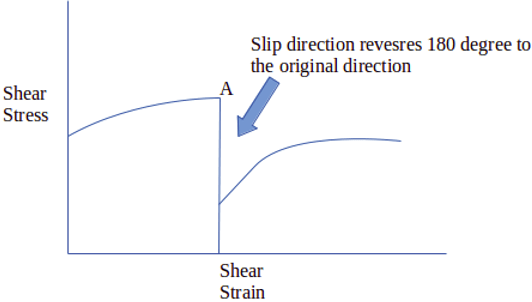 5. The dislocation of low mobility that is produced by a dislocation reaction is called a ______ dislocation.
a) sessile
b) glissile
c) screw
d) edge
View Answer

Answer: a
Explanation: The reaction of 2 moving dislocations can result in new dislocation, which does not lie in low shear stress. Hence they are not mobile and called sessile dislocation.

6. Which of the following phenomena is responsible for the formation of sessile dislocation?
a) Lomer-Cottrell barriers
b) Frank read source
c) Age hardening
d) Dislocation jog and kink
View Answer

Answer: d
Explanation: Jog and kink are formed when dislocation on two different planes cut each other. Dislocation threading is the result of the interaction of many dislocations at an obstacle. Slip result from shear, not from dislocation interaction.

8. Cross slip can occur in both the edge dislocation as well as in screw dislocation.
a) True
b) False
View Answer

10. Strain hardening due to ___________ process arises from short range force occurring over a distance of 5 to 10 atomic distance. This hardening can be overcome at finite temperatures with the help of thermal fluctuations, and therefore, it is temperature and strain-rate-dependent.
a) dislocation cutting
b) dislocation pile-up
c) second phase particle
d) alloying
View Answer

Answer: a
Explanation: Strain hardening due to dislocation cutting process arises from short range force occurring over a distance of 5 to 10 atomic distance. On the other hand, strain hardening arising from dislocation pile-up at barriers occurs over longer distances, and therefore, it is relatively independent of temperature and strain rate.

To practice all areas of Mechanical Metallurgy for online Quizzes, here is complete set of 1000+ Multiple Choice Questions and Answers.