1. Which of the following is the strain-controlled cycle fatigue in which the strain amplitude is kept constant during fatigue process?
a) Car wheel
b) Crankshaft
c) Thermal expansion and contraction of component
d) Dial meter
View Answer

Answer: c
Explanation: The strain can be controlled by controlling the dimension of the element. In the temperature cycle, the part expands and contracts at a given rate with change in temperature. So, it is an example of the strain-controlled cycle.

2. Which of the following curve represents the cycle hardening of the material?
a) 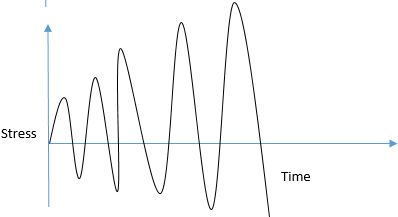 Answer: b
Explanation: In the case of cycle hardening, the stress value goes up with each cycle. So, the required amount of stress increases with time or number of cycles.

3. Which of the following curve represents the cycle softening of the material?
a)

Answer: a
Explanation: In the case of cycle softening, the stress value goes down with each period, So the required amount of stress decreases with time or number of cycles.

4. The following figure represents the hysteresis loop for cycle softening of the material. 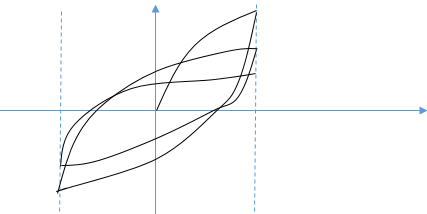 Answer: a
Explanation: In the case of the cycle softening of the hysteresis loop, the stress response keeps on decreasing with each cycle. So the loop gets smaller and smaller.

Answer: a
Explanation: This relation defines the low cycle fatigue of material. It states the relationship between the strain amplitude to the life of the component before failure.

Answer: b
Explanation: The fatigue ductility coefficient is approximately equal to true fracture strain for most of the metals. It is defined as the strain intercept at 2N=1.

8. Smaller the value of c (fatigue ductility exponent) ____________ will be the life of component.
a) longer
b) shorter
c) no relation
d) depends on the material
View Answer

Answer: a
Explanation: The relationship between the fatigue ductility exponent and cycles is given by:
-> Δεp/2=ε’f (2N)c
So, if smaller the value of c, smaller will be the strain amplitude and longer will be the life of the component.

Answer: c
Explanation: The value of c lies between the -0.5 to -0.7 for most of the metal. This relationship is due to the fact that if the strain amplitude is larger, the failure cycles will be shorter.

Answer: d
Explanation: The low cycle fatigue is associated with either high stress or high strain amplitude, which causes premature failure of the components.